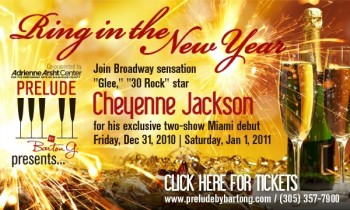 A very special offer to Adrienne Arsht Center patrons: A 20% off gift for 2011!
Show Tickets start at $95 for New Year’s Eve and $75 on New Year’s Day. Dinner and show options are available. To receive 20% off your show tickets, use arsht4TwO for the promo code*.
Purchase tickets Online.

“Glee” and “30 Rock” star Cheyenne Jackson makes his Miami debut at Prelude By Barton G. to ring in 2011! In an exclusive two-show only engagement co-presented by the Adrienne Arsht Center and Prelude By Barton G., the monumental New Year’s celebration includes a special performance by Jackson.

On and Off Broadway, he has starred in; Finian’s Rainbow (Drama Desk nomination) , Damn Yankees, Xanadu (Drama League , Drama Desk nominations) The Agony & the Agony, All Shook Up (Theater World Award, Drama League, Outer Critics Circle nomination) the premiere cast of Altar Boyz, Aida, Thoroughly Modern Millie, The Cartells, On the 20th Century, and The 24 Hour Plays. Other film and television credits include; the Oscar nominated United 93, Curiosity, Hysteria, Photo Op, Family Practice, Life on Mars, Ugly Betty, and It Takes a Village.