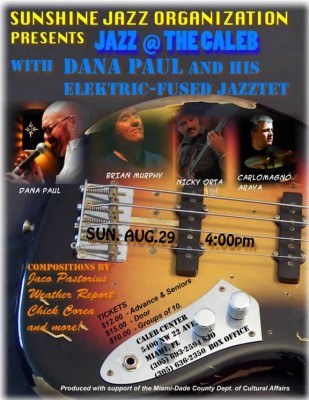 Dana Paul is known not only as a singerâ€™s singer, heâ€™s regarded as a musicianâ€™s singer. His sensational vocal talents are internationally recognized and, paired with a charming personality and energetic stage presence, Dana has been on the A List for many years. His musical influences are easily apparent â€“ from Tony Bennett and Joe Williams to Al Jarreau, George Benson, Frank Sinatra, Lou Rawls and Mel Torme to hipsters like Mark Murphy and Kurt Elling. His â€œElektric- Fused Jazztetâ€ promises to deliver an unforgettable performance of exciting Jazz. Dana Paul has a superb mastery of vocal performance and collaboration and, coupled with an immense passion for music and people, and joined by his stellar band mates, audience members will surely be taken on a fabulous musical journey.

Drummer, Carlomagna Araya, has degrees from U.Mâ€™s Frost School of Music and formal training at Berklee College of Music. One of the busiest players on the scene, he has performed on two multiple-Grammy nominated albums, winning â€œBest World Music Albumâ€ and â€œBest Tropical Contemporary Albumâ€ with Ruben Blades. Arayaâ€™s versatility has earned him opportunities to perform in many prestigious venues including Carnegie Hall, Apollo Theater, Olympia Theater (Paris), and Jazz festivals including Montreux, JVC, Hamburg, Monterey, and Puerto Ricoâ€™s Heineken Jazz Fest.

Bassist, Nicky Orta, is from a musical family and discovered his calling at a young age. He has studied with some of South Floridaâ€™s finest instructors including Vince Bredice, John Georgini and Whit Sidener. Nickyâ€™s versatility has enabled him to play with many top artists including Arturo Sandoval, Randy Brecker, Wayne Newton, â€œCachaoâ€ Lopez, Othello Molineaux, Toots Thielemans, James Moody, Duffy Jackson, Julio Iglesias and more. He received a Grammy nomination in 2006 for his work on the album â€œAnd Sammy Walked In” by Sammy Figueroa & His Latin Jazz Explosion.

Since 1987, The Sunshine Jazz Organization has continued to promote and preserve our precious art form â€“ Jazz.