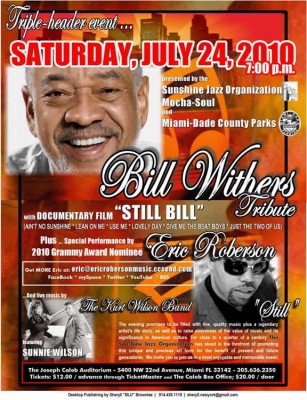 Prepare for explosions come Saturday, July 24, 2010, 7:00 p.m. when The Sunshine Jazz Organization presents this triple-header event featuring the acclaimed Bill Withers documentary, â€œStill Billâ€, brought back by popular demand to The Joseph Caleb Auditorium. Withers has sung his way into the hearts of millions worldwide. His ability to say – what so many feel â€“ is uncanny. Bill Withers is mentioned in the same breath as the greats â€“ Stevie, Marvin, Donny â€“ yet none sing with the directness, write with the frankness, nor compare in articulating the truth with much sparseness. He is a singer and songwriter who has topped pop charts and received awards, has been covered by Barbara Streisand and looped by Dr. Dre, and continues to influence an entire generation of artists. Honors include Soul Train, Grammy Songwriters, ASCAP Rhythm & Soul â€“ Heritage Award, West Virginia Music and Rhythm & Blues Foundation â€“ Pioneer Award and more. He has also received Grammy Awards for â€œAinâ€™t No Sunshineâ€, â€œLean On Meâ€, and â€œJust The Two of Usâ€. The profound honesty and sensitivity found in his timeless music has made Bill Withers one of Americaâ€™s premier singer/songwriters, combining soulful warmth and a genuine, folksy feel with his immediately recognizable voice.

Preceding the film will be a concert by The Kurt Wilson Band featuring Sunnie Wilson performing some of Bill Withersâ€™ award winning hits. Following the film will be a very special appearance by Grammy-nominated Indie artist Eric Roberson touring in support of his new cd release â€œMusic Fan Firstâ€ with his song â€œDealingâ€, featuring Lalah Hathaway.

The purpose of this event is to present an evening of live, quality music plus a legendary artistâ€™s life story, as well as to raise awareness of the value of music and its significance in American culture. For close to a quarter of a century The Sunshine Jazz Organization has stood in the forefront of promoting this unique and precious art form for the benefit of present and future generations.