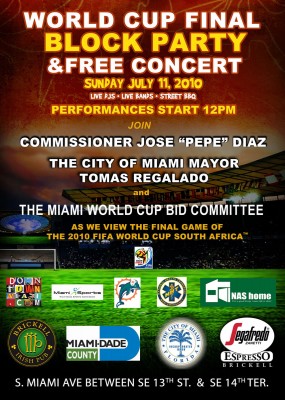 This will be biggest Block Party in Miami history to watch the final battle between Spain and Netherlands. There will be Giant Led Screens, celebrity appearances, DJs, multiple bars, street BBQ, and more. A Free concert with Surprise musical performances will begin at 12:00pm (noon)on a massive main stage as we close off South Miami Ave between S.E. 13th Street and S.E. 14th Terrace

The event will be covered by the major television networks and will be broadcasted via satellite straight to Johannesburg. Letâ€™s show the entire World that the â€œGame is in Miamiâ€, and that we deserve to be the hosts of the next World Cup in 21018/2022!