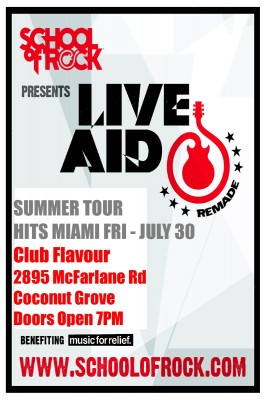 School of Rock presents Live Aid Remade. A tribute to the historic 1985 concert/fundraiser that took place in London and Philadelphia, the show will feature selections from the Woodstock of the 80â€™s as it came to be known â€“ that have truly stood the test the time.

Global. As in, Live Aid was a global jukebox where U2 and Madonna could rub shoulders with The Beach Boys and The Four Tops. Where Judas Priest could go on directly after Crosby, Stills, & Nash and Run DMC and Black Sabbath could play back to back. Where 80â€™s one-hit wonders like Billy Ocean + Rick Springfield could share the stage with Keith Richards and Tina Turner. Simply put, it was where musicians could put aside their egos and play for the enjoyment and the betterment of others.

I still canâ€™t think of a better reason to rock. We hope you feel the same.
The 2010 Tour will hit Miami Friday, July 30th and will feature one of our own Miami School of Rock student graduate, Chris Bromley, on guitar.

Tickets for this event are available online.
Come out and support this great cause.