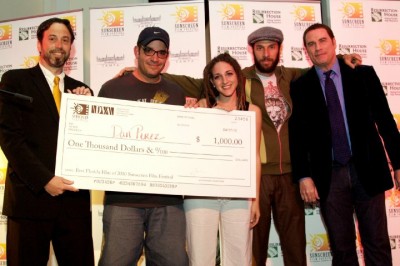 I’d like to invite you to a screening of my award-winning documentary film “P.A.T.H.” @ the DocMiami International Film Festival at the Doral Golf Resort & Spa this Saturday, May 29th @ 1:20pm.

Fresh from winning “Best Florida Film” at the 2010 Sunscreen Film Festival (the award presented by none other than John Travolta himself!) â€œP.A.T.H.â€ the latest documentary film from award-winning South Florida filmmaker Dan Perez returns to Miami for a special screening at the DocMiami International Film Festival in Doral.

“P.A.T.H.” (which stands for Preserving, Archiving and Teaching Hip-Hop History) documents the P.A.T.H. Hip-Hop Academy, the first ever summer camp of it’s kind in Miami. During the four week camp, teenagers from ages 13-18 studied Hip-Hop history, the art of DJing, MCing (rapping), B-boying and B-girling (break-dancing), and urban art (graffiti).

Several of Miami’s most talented artists and performers served as instructors. The list included urban artist Krave, DJ Immortal from Scratch Academy, “B-Girl” Beta Rawkz and Soulflower who has shared the mic with emcees such as Erykah Badu, KRS-ONE and Outkast.

The camp also featured an impressive lineup of guest speakers. Hip-Hop pioneer Grandmaster Dee of Whodini, DJ Epps, popular Miami artist Lebo, Triple Seven, Faisal Tavernier of Urban America Newspaper, Mecca aka Grimo and International motivational speaker Kirk Nugent were just some of the names that took the time to stop in and address the students.

The film is suitable for all ages!
For more info, visit: http://danperezfilms.wordpress.com