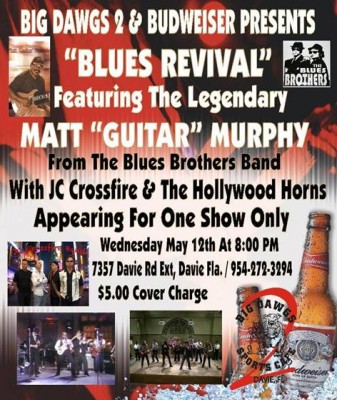 Murphy has been living in South Miami since 2003 while recuperating in semi-retirement. In 2008 Tim Oâ€™Donnell from The Nouveaux Honkies coaxed Matt out to perform at a festival in Fellsmere, Florida. Since then Matt has performed with TNH at many venues throughout South Florida. Oâ€™Donnellâ€™s label, Bluzpik Rekerdz, stepped up to put a booking agent and management in place and starting taping a Matt Murphy documentary which will finish filming at the Daytona Blues Festival on October 9, 2010.

Bluzpik President and Director of Artist Relations Leo Gale states, â€œIt has been quite a unique experience working with a living legend and old school guitarist. There are always plenty of Blues Brothers fans at the shows and that is fun. But the real thrill for me is to watch the guitarists and other musicians in the crowd stand in awe with their mouths open. Matt has influenced generations of guitarists from Hubert Sumlin in the 50â€™s and Jeff Beck in the 60â€™s to future stars on the way up like Albert Castiglia and Tim Oâ€™Donnell. Mr. Murphy is healthy again, playing tremendously, looking forward to performing at big festivals and getting back into the studio.”

Known by millions from his role as guitarist in the smash movie â€œThe Blues Brothersâ€, Matt â€œGuitarâ€ Murphy is doing a final show locally before completing his comeback at the Chicago Blues Festival in June with his former band mate James Cotton. Matt is performing at major Blues Festivals this summer and fall for the first time since suffering a stroke in the early part of the decade. He will be performing with the James Cotton Band, The Legends Band featuring Pine Top Perkins, Hubert Sumlin and Willie â€œBig â€œ Eyes, and his Florida based band The Nouveaux Honkies over the summer and into 2011.