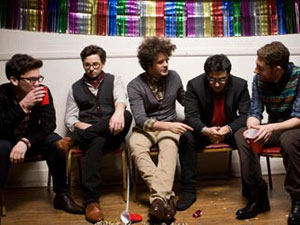 http://www.passionpitmusic.com
We’ve been away from home long enough– and to celebrate our return to the United States, we’re going to try and see as much of it as we can, as quickly as we can!
We’ll be touring the U.S. for the entire month of June, from New York to California and (almost) everywhere in between. And even better, our pals in Tokyo Police Club will be on board for most dates.

Redemption. Paranoia. Guilt. And brief glimpses of a better tomorrow, all cloaked in pop hooks that truly help the medicine go down.

What is this? Another lost LP from Brian Wilsonâ€™s sandbox phase? If only things were that simple. What weâ€™re really alluding to here is Passion Pitâ€™s first proper full-length, Manners, a bird-flipping break from the blogosphere by a 21 year old with much more on his manic mind than girls, girls, girls. You know, important matters, like the end of the world and learning to love someone other than the man in the mirror.

Thatâ€™s the thing people missed about Passion Pitâ€™s debut EP, Chunk of Change. While it was originally meant as a Valentineâ€™s Day gift for a girlfriend who â€œput up withâ€ frontman Michael Angelakos, that detailâ€™s only half of a story that isnâ€™t so cuddly when you consider the circumstances.