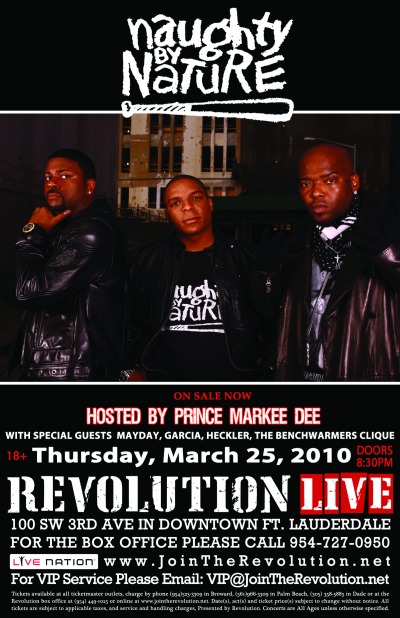 Naughty by Nature pulled off the neat trick of landing big, instantly catchy anthems on the pop charts while maintaining their street-level credibility among the hardcore rap faithful; one of the first groups to successfully perform such a balancing act. The group was formed in East Orange, NJ, in 1986, while all three members â€” MCs Treach (born Anthony Criss) and Vinnie (born Vincent Brown), and DJ Kay Gee (born Keir Gist) â€” were attending the same high school. Initially called New Style, they began performing at talent shows and were discovered by Queen Latifah a few years later; she signed the group to her management company and helped them land a deal with Tommy Boy Records. Naughty by Nature’s self-titled debut was released in 1991 and produced an inescapable Top Ten hit in “O.P.P.” (which supposedly stood for “other people’s property,” though a close listen to the lyrics revealed that the second P represented male or female genitals). “O.P.P.” made Naughty by Nature crossover stars, yet their ghetto sensibility and gritty street funk (not to mention Treach’s nimble rhyming technique) made them popular in the hip-hop underground as well. Treach began a secondary acting career in 1992, appearing in Juice; he would go on to supporting roles in The Meteor Man, Who’s the Man?, and Jason’s Lyric, among others.

Naughty by Nature repeated their success with the 1993 follow-up album, 19 Naughty III, which produced another ubiquitous crossover smash in the “hey! ho!” chant of “Hip Hop Hooray”; the album hit the Top Five and, like its predecessor, went platinum. 1995’s Poverty’s Paradise was the group’s final album for Tommy Boy; though it didn’t spawn any major hits, it went on to win a Grammy for Best Rap Album. A recording hiatus of several years followed; during that time, Treach pursued his acting career, most notably landing a recurring role on the HBO prison drama Oz; and Kay Gee greatly expanded his outside production work, helming records for ZhanÃ©, Aaliyah, Krayzie Bone, and Next, among others.