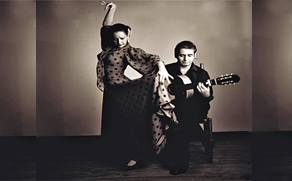 Emilio Prados, Flamenco Guitarist
Emilio Prados was born in La Roda de AndalucÃ­a, a small town near Seville. He learned to play the guitar from his father and brother, both of whom played guitar as well as lute. Emilio was very talented and excelled quickly on the guitar. His music of choice was flamenco and he spent hours listening to NiÃ±o Ricardo. He learned by ear all the flamenco styles and by age 14 was already accompanying flamenco singers, most notably Pepe Marchena. When he was 15 he moved to Barcelona where he lived until coming to the U.S.in 1962 with Roberto Iglesias Spanish Dance Company. He spent two years touring in the U.S. and in 1962 settled in New York. He got a job at the Famous Chateau Madrid Tablao where he met and became close with the great flamenco guitarist Sabicas, who was his greatest influence. Emilio Prados came to Miamiin 1984 where he still resides. He has worked at all the most famous Tablaos and with many great Flamenco Artists. He currently works at Casa Panza restaurant Thursdays through Sundays.

Manuel PalacÃ­n, Flamenco Singer
Manuel PalacÃ­n, was born in San Miguel de Jerez de la Frontera, Spain.By the age of five his passion for el cante flamenco was clear and soon he would begin his professional singing career. He sang in the â€œJueves Flamencosâ€ in Jerez, organized by Manuel Morao where many great flamenco artists made their debut. Later he went to Madrid where he has worked in all the most famous Tablaoas and with many prominent Dance companies, most notable The Spanish National Ballet. Mr. PalacÃ­n is regarded as a foremost expert on Cante Flamenco styles and history. Besides performing, Manuel PalacÃ­n is a highly sought after teacher and educator, giving presentations on flamenco at many of the most prestigious flamenco festivals throughout Europe and the U.S.