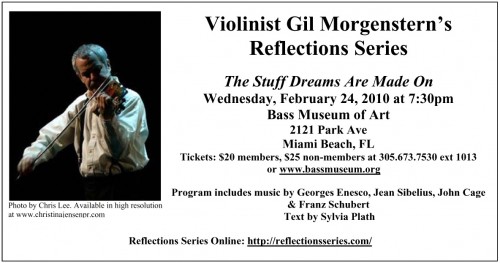 The Bass Museum of Art is proud to present the second concert of Gil Morgensternâ€™s Reflections Series on Wednesday, February 24. Acclaimed for his innovative programming that contextualizes historical styles and arts movements for a 21st century audience, Morgenstern merges artistic mediums, encouraging audiences to engage numerous senses and reflect anew of universal themes.

The Stuff Dreams Are Made On, is inspired by Carl Jungâ€™s famous â€œRed Bookâ€ in which he details his theory of the collective unconscious and will explore the integral role dreams play in culture. Musical works performed by Gil Morgenstern with pianist Donald Berman will include John Cageâ€™s Dreams, Georges Enescoâ€™s Impressions dâ€™enfance (Impressions of Childhood), Jean Sibeliusâ€™ Nocturne and Franz Schubertâ€™s Fantasy. Aubyn Philabaum will read text by Sylvia Plath. Using music, prose and poetry, the program will invite the audience on a nocturnal journey from dusk through dawn, creating a narrative of memory, nightmare and fantasy through the use of music and words.

At 7:30pm on Wednesday, February 24, 2010 violinist Gil Morgensternâ€™s Reflections Series will continue with a second concert at the Bass Museum of Art. The performance, entitled The Stuff Dreams Are Made On is inspired by Carl Jungâ€™s famous â€œRed Bookâ€ in which he details his theory of the collective unconscious and will explore the integral role dreams play in culture. Musical works performed by Gil Morgenstern with pianist Donald Berman will include John Cageâ€™s Dreams, Georges Enescoâ€™s Impressions d’enfance (Impressions of Childhood), Jean Sibeliusâ€™ Nocturne and Franz Schubertâ€™s Fantasy. Aubyn Philabaum will read text from Sylvia Plathâ€™s Johnny Panic and the Bible of Dreams, The Wishing Box, The Ghostâ€™s Leave- taking, Southern Sunrise, and The Unabridged Journals. Using music, prose and poetry, the program will invite the audience on a nocturnal journey from dusk through dawn, creating a narrative of memory, nightmare and fantasy through the use of music and words.

As Artistic Director of the Reflections Series, Gil Morgenstern utilizes innovative programming to contextualize historical styles and arts movements for a 21st century audience. The performances merge artistic mediums, encouraging audiences to engage numerous senses and reflect anew on universal themes. The Reflections Series mixes solo and chamber music with visual art, poetry, and prose from around the world.

The final concert on May 6 is called A Pilgrim’s Progress and will include music of Francis Poulenc and Bruce Saylor, and text from Dante’s “Inferno.”

More about Gil Morgenstern: Acclaimed for his artistry and technical brilliance, violinist Gil Morgenstern has performed in many of the worldâ€™s great concert halls. The New York Times has hailed his playing as â€œa perfect demonstration of supreme ability;” â€œa rare poet of the violinâ€ reported The South China Morning Post; â€œMorgenstern played a program that tested every part of a violinistâ€™s equipment and he did it all beautifullyâ€ wrote The Washington Post.

Mr. Morgensternâ€™s career has taken him to international venues including Wigmore Hall, London; Cultural Center Concert Hall, Hong Kong; the American Academy, Rome; Salone dei Cinquecento, Florence; El Teatro Sucre, Ouito; Arts Centre and State Theatre, Melbourne, Australia. He has also toured the U.S. extensively, performing in FOR IMMEDIATE RELEASE Jessica Kiger, 646.536.7864, Jessica@christinajensenpr.com Photo by Chris Lee. Available in high resolution at www.christinajensenpr.com recital and as guest soloist with many leading orchestras. Of his interpretation of Tchaikovskyâ€™s Violin Concerto in D Major the Santa Barbara News Press raved, â€œViolinist Morgenstern â€“ that’s the name to remember. While he dazzled everyone with his dexterity, he realized all the artistic nuances. His bowing was magnificent; his tone just plain gorgeous.â€

Mr. Morgensternâ€™s discography includes works by Beethoven, FaurÃ©, Copland, Ravel, Kodaly, Sessions and the award-winning American composer George Tsontakis. His latest recording, 20th Century Duos for Violin and Cello, was the No. 1 classical CD for over a month on eMusic, the largest online store for independent music in the world, and was one of the top ten best selling classical music albums on Amazon.com. Of the CD The New York Times raved, â€œthe music is terrific and the performances compelling on this surprisingly exciting and excellently engineered recording.â€ Mr. Morgenstern records for the MMC, Engine Company and Koch International Classics labels, and can regularly be heard on National Public Radio and classical music radio stations across the country.

In addition to performing, Mr. Morgenstern is the artistic director of the Reflections Series, which presents performances in New York, Florida, North Carolina, Pennsylvania, Florence and Capri, Italy. The 2009-2010 season is inspired by art exhibits at the Rubin Museum of Art in New York and features solo and chamber music, with visual art, poetry, and prose from around the world, in combinations that invite the audience to reflect anew on universal themes. Mr. Morgenstern is also the co-founder and co-artistic director of Nine Circles Chamber Theatre, a creative organization dedicated to exploring the collaborative nature of inter-disciplinary performance, and of the Broyhill Chamber Ensemble, a diverse chamber group specializing in Classical, Romantic and contemporary works of mixed instrumentation.

Mr. Morgensternâ€™s many prizes and honors include a command performance for President Ford at the White House, Gold Medals in The Washington International and National Society of Arts and Letters Competitions, and the Jaycees of America’s â€œOutstanding Young American” award.

In 1998, Mr. Morgenstern appeared as violin soloist in U.S. Poet Laureate Robert Pinskyâ€™s translation of Danteâ€™s Inferno which toured the country and was broadcast on PBS and NPR, for which it received a Peabody nomination. The violin plays a central and unique role in this production and is an integral part of the dramatic action.

Highlights of Mr. Morgenstern’s recent seasons include performances with the Julliard Dance Company at Lincoln Center, NCNY Dance Company at An Appalachian Summer Festival and with the Brooklyn Ballet; the premieres of staged versions of The Epic of Gilgamesh, Venus and Adonis with Claire Bloom and John Neville, and Samuel Beckett at 100 at New York Cityâ€™s 92nd Street Y and at Harvard University. Morgensternâ€™s performance in the Nine Circles Chamber Theatre production of When Samson Met Delilah toured Holland to rave reviews and his recent appearance in Toronto was broadcast throughout Canada on CBC. In addition, his â€œFalling Bodies,â€ an original Nine Circles Chamber Theatre work of music and words based on the lives of the scientist-poet Galileo Galilei and poet-scientist Primo Levi, sold-out performances in New York and is now touring internationally.

More about Aubyn Philabaum: Aubyn Philabaum was recently named one of â€œTwelve Freshest Faces of 2009 in New York Theaterâ€ by justshowstogoyou.com. She has worked both regionally and in NY with The Yale Rep, ACT, Cry Havoc, Singularity, The Kraine, Brooklyn Arts, Mills Entertainment and BASE Entertainment. She has also appeared in numerous commercials, educational videos and short films throughout NYC and the Southwest. Company Member, InViolet Rep. BFA in acting, Boston University and LAMDA; MFA in acting, Yale School of Drama.

More about Donald Berman: Pianist Donald Berman is a champion of new works by living composers, overlooked music by twentieth century masters, and recitals that link classical and modern repertoires. His recent CDs The Unknown Ives volumes 1 & 2, and The Uncovered Ruggles on New World Records have been internationally acclaimed. He is the Artistic Director for the American Academy in Rome Concert series in New York and subsequent four-volume CD on Bridge Records. He has presented recitals, lectures, and masterclasses recently in Israel, Italy, and throughout the United States. He has performed to critical acclaim in New York City at Miller Theater, Zankel Hall, Merkin Hall, and Weill Hall at Carnegie Hall. Other recent work has ranged from Mozart concertos with the Columbus Symphony to American music retrospectives, to recitals linking Haydn and Schubert with new music, called “thrillingly clear” (The New York Times). He is a prizewinner of the 1991 Schubert International Competition and a member of the Dinosaur Annex New Music Ensemble since 1987. Berman has been presented by League/ISCM, Masters of Tomorrow in Germany, French Cultural Services (FaurÃ© Sesquicentennial), and many others. He has premiered concertos, solo and ensemble works with many organizations including Collage, Real Art Ways, Pro Musica Symphony, and on his series Firstworks and Pioneers and Premieres.