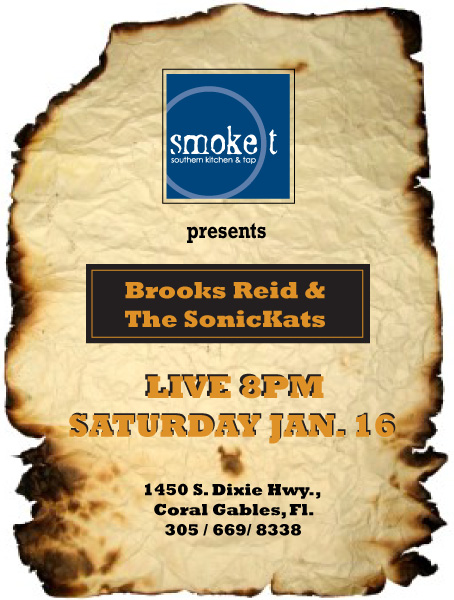 “The menu was really important to us,” said Altman. “We wanted sophisticated southern food which, until now, didn’t exist in Miami.â€

As pit barbecue is one of the most important styles of food in Southern cuisine, Smokeâ€™t showcases various flavors from U.S. barbecue capitals, all prepared on its in-house smoker, including Shredded Brisket with a Texas style BBQ sauce, Kansas City baby back ribs, Memphis style dry rub spare ribs and Carolina pulled pork. Rated â€œBest BBQ Sauceâ€ by Jack Daniels Grill Your Eats South Beach, Altmanâ€™s knock-your-socks-off original creation is featured in most of Smokeâ€™tâ€™s offerings.

At 5,000 sq. ft., Smokeâ€™t has capacity for more than 200 guests. Lounge-style furniture, cozy banquettes and roomy tables ensure a right-at-home feeling, where patrons are the center of attention. Eclectic artwork, antique dÃ©cor elements and clever, eye-catching design features, like in-wall wood storage (for the smokers), round out Smokeâ€™tâ€™s casual yet chic ambiance with a touch of whimsy. The restaurant also features a club-style sound system for upcoming LIVE, classic rock music performances on their stage that highlights a Yamaha piano.

Ten flat screen televisions, a shuffleboard table and outdoor seating make Smokeâ€™t a perfect spot for a light bite or drink. Smokeâ€™tâ€™s bar features 12 beers on tap, in addition to the 87 other beer selections and food items on its extensive bar menu.

In the months ahead, Smokeâ€™t will launch an extensive wine program.

For reservations, please call 305.672.0011. Additional information about Smokeâ€™t Southern Kitchen & Tap can be found at www.smoketbbq.com.

Sorry ladies, Lounge area only!
1/2 off Frozen Margaritas
1/2 off Signature Martinis
1/2 off all Wines by the Glass
1/2 off all Appetizers