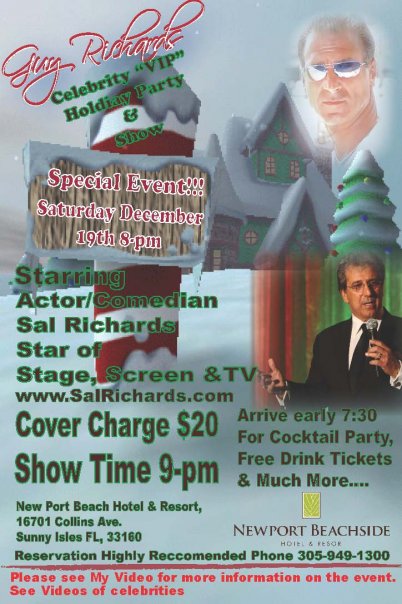 Actor/Comedian Sal Richards was touted, â€œOne of The Funniest Guys in Show Biz!â€ by the New York Daily News and Cindy Adams of the New York Post insists â€œSal Richards Is Hilarious, a Must See!” Las Vegas, Atlantic City, Broadway, and World wide. In addition to his comic appeal, Richards has appeared in numerous movies including â€œOut For Justiceâ€ with Steven Segal and â€œRoundersâ€ with Matt Damon as well as televisions show including â€œLaw & Order: Criminal Intentâ€ just to mention a few. http://www.salrichards.com/

Successfully following in his fatherâ€™s footsteps is: Actor/Comedian Guy Richards, Richards is one of the most versatile and multi-talented entertainers in the industry today. His high energy comedy is not only infectious but contagious. He has appeared on Television, in Films on Broadway, in Las Vegas and Atlantic City, and tours nationwide. Richards is currently shooting a new film titled â€œEngagingâ€ on Miamiâ€™s famous South Beach. He recently finished an award-winning documentary film entitled â€œMr. Laughs A Look Behind The Curtain.â€ DVD Now available on amonzon.com (Mr. Laughs). Richards gears his humor according to venueâ€¦See Holiday event videoâ€¦ Face Book Link

Guests will enjoy Absolut Vodka cocktail specials, 50/50 raffle, free gift giveaways and a raffle for a chance to win a weekend stay at the Newport Beachside Hotel & Resort & much more.