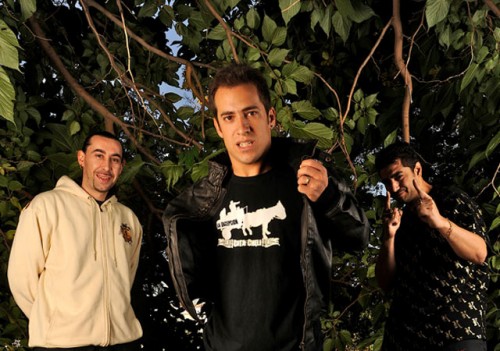 In November â€œCCE on Stageâ€ features the final round of performances by La ExcepciÃ³n with film and a music concert with Depedro + Martin Wenk.

La ExcepciÃ³n, the Spanish leading flamenco hip-hop band will have a double take in Miami with the presentation of the movie â€œEl Truco del Mancoâ€ where the bandâ€™s mastermind â€œEl Languiâ€ is the leading actor. The movie was awarded 3 Goya Awards for best direction, actor and theme song. www.eltrucodelmanco.com

La ExcepciÃ³n (The Exception That Proves The Rule) is a rapband from Madrid, composed of two MCs: El Langui (Juan Manuel Montilla) and Gitano AntÃ³n (Antonio Moreno), and DJ La dako style (Javier IbaÃ±ez). They started a small revolution in the Spanish hip-hop scene, opening new doors with a very self-assured and personal style that integrates flamenco, Cheli slang, and a lot of humor, without losing the social critique so central to hip-hop. They have made, from a very local identity, a universal rap that has become popular around the whole country and has achieved rankings not normally held by hip-hop. They won Best Album of the Year in Rolling Stone Magazine for their first work “Cata Cheli”. www.laexcepcion.net

DePedro may be the first solo album for the man behind the name, Jairo Zavala, but in no way is it his debut. Already a celebrated recording artist in Spain, where he was born and raised, Zavala has spent the past two decades playing, writing, and performing with bands like Amparanoia, Vacazul, Los Coronas, and Calexico. The Miami concert will feature Martin Wenk from Calexico. DePedro is his most personal work, with songs written from his own experiences, his own thoughts and feelings, the music heâ€™s looked to – from Afrobeat to flamenco to prog to pop. The inspirations are simple, the everyday things we all experience that unite and define us as human: regret, memory, love, fear, loss, and happiness. Jairo Zavala is a National Geographic World Music recording artist. www.myspace.com/myspacedepedro