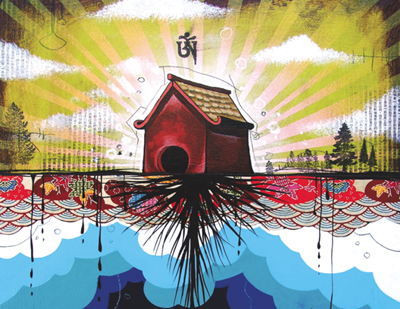 ART WHINO: MIAMI will be an innovative New Brow exhibition, complete with receptions and musical performances that will heighten the experience beyond the typical art show. Art from two separate traveling exhibitions, LIFE ESSENTIALS and OLD SKOOLINâ€™ will be brought together in Miami for the first time. This landmark multi-city, comprehensive exhibition will bring together the best of both traditionally trained and urban street art styles, helping to more define this era in contemporary art and set the bar even higher for the direction of art today. This combined show will highlight both music and art that spans the spectrum of current trends, and will be accompanied by installations and auxiliary exhibitions featuring live painting by several Art Whino artists.

Art Whino has also teamed up with Urbanite Bistro to host a special all day event Thursday, December 3rd in the outdoor garden space of Urbanite Bistro, featuring over 15 Art Whino artists painting live and musical performances. Artists will also showcase some of their newest works inside the restaurant for the entire of the month of December.

Outside of Urbanite Bistro, on several surrounding buildings, Primary Flight: The worldâ€™s largest site-specific street level mural installation will be taking place throughout the week. For more information visit http://primaryflight.com/blog/

Art Whino Gallery
Art Whino is a DC based art gallery whose mission is to bring together the freshest and rawest talent from around the world. With over 400 artists in the Art Whino arsenal, ranging from California to New York, Germany to Japan and beyond, Art Whino has become an all encompassing force in the art world. Exhibitions cover the whole spectrum of new art forms ranging from exposing emerging stencil and wheat pasting artists to showcasing the most skilled leaders of many different genres. For the life essentials Exhibit 100+ artists have been invited to participate exhibiting one piece each.
http://www.artwhino.com

Urbanite Bistro
Chef-Operator Frank Imbarlina created a diverse menu at The Urbanite Bistro sure to keep patronsâ€™ palates pleased and elated. With nearly 20 years in the culinary industry, Imbarlina is best known for his first solo venture, â€œBrass Monkeyâ€ in Brigantine, NJ receiving the â€œBest of the Shore 2006â€ by critic Craig LaBan of the Philadelphia Inquirer, 4-stars from the Courier Post, 3-stars from the Press of A.C., and many other accolades from regional print publications, television and radio for his concept and menu..

Frankâ€™s passion for food comes from his extensive culinary training with chefs throughout the Northeast. In 1999, Frank partnered with Chef Larry Berson of the New York Times 4-starred â€œThe Carriage Houseâ€ in Manhattan to launch â€œContemporary Caterers,â€ offering eclectic, quality catering services. Their client list included members of the German, Italian and Argentinean consulates, Look Magazine, VOGUE Magazine and many other organizations in the fashion, production and financial industries. Frank has also consulted for a number of New York City restaurants and lounges.

From 1996-1999, Frank was the general manager and wine buyer at â€œNo. 18â€ in Manhattan, featured in the Food Networkâ€™s â€œDining Around.â€ Frank worked closely with Chef Dale Balsamo formerly of Montrachet, a protÃ©gÃ© of David Bouley. Frankâ€™s thoughtful wine list received an A+ from the renowned wine critic Kevin Zraly and his list of original martinis was included in Ray Foleyâ€™s â€œUltimate Little Martini Book.â€
http://www.urbanitebistro.com

Primary Flight
Primary Flight is a collaborative curatorial organization dedicated to the production of site-specific, street level, mural installations. Since its inception in 2007, Primary Flight has brought together over 100 of the worldâ€™s most influential Street Artists to install their bodies of work live in the streets of Wynwood. These projects provide a catalyst for burgeoning arts communities. Two books about Primary Flight events are scheduled to be released in the summer and winter of 2009, through Ginko Press Publishing.
http://primaryflight.com/blog