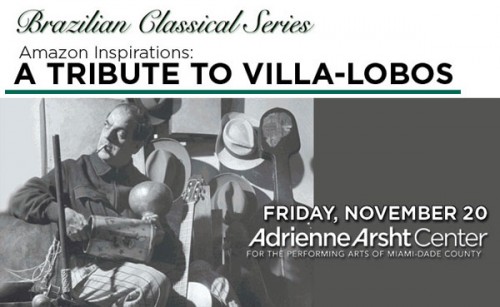 “Nothing is sufficient to revere the memory of Villa-Lobos.” – Leonard Bernstein

The first Brazilian Classical Series concert will be dedicated to the symphonic music of Heitor Villa-Lobos (1887-1959), in light of his 50th anniversary of passing. In his music, Villa-Lobos describes Brazil in its unique diversity of colors and sounds. Among Brazil’s infinite diversity, the Amazon rainforest remained Villa-Lobos’ favorite source of inspiration throughout his life.

The program features selections from his last symphonic poem “Forest of the Amazon”, the well-known “Bachianas Brasileiras No. 5”, both sung by internationally renowned soprano Edna D’Oliveira, as well as the Prelude from “Bachianas Brasileiras No. 4” and “MÃ´moprecoce”, a fantasy for piano and orchestra performed by critically acclaimed pianist Simone LeitÃ£o. Joined by The Miami Symphony Orchestra and led by guest conductor Luiz Fernando Malheiro, Artistic Director of the Amazon Philharmonic Orchestra and of the Amazon Opera Festival, both based in city of Manaus, Brazil.