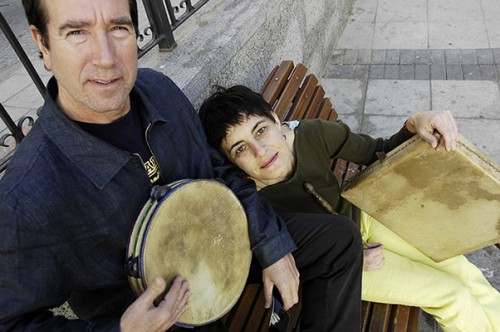 Eliseo Parra is one Spain’s leading performers and researchers of folk music. He has traveled to small villages to rediscover old songs, musical instruments and learned how to play some instruments in the traditional style. He reconstructs folk music by adding modern elements. His background may seem surprising to some. He began as a rock musician and afterwards became interested in jazz and Caribbean rhythms. Eventually, he ended up rediscovering Spanish folk music.
Rosalia, Guitar player, songwriter, composer and vocalist, a truly original musician. With a fabulous energy and singular mastery of her instrument, able to un-earth the ancient popular music of her native Spain and embody it in an astonishing performance full of passion and mastery. Rosalia’s music is an inspired encounter of beauty, guts and virtuosity. Though educated with some of the bests musicians in the world, RosalÃ­a’s songs reveal a truly un-affected, creative and brave artist who has become a cult musician for an international audience. Her music is a fusion of traditional Spanish Folk music that has been largely forgotten. The adaptations combine this folk heritage, which is not derived from Flamenco, with jazz and Latin colors. She has taken many sources and created a new musical vision enriched by her virtuosity guitar technique.
Location
CCE Miami
800 Doublass Rd
Coral Gables, FL