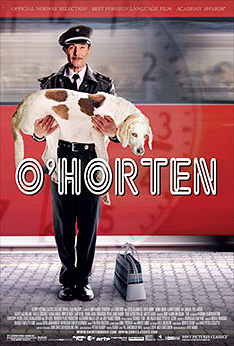 The moment the train leaves the station without engineer Odd Horten (Bard Owe) aboard, he realizes that the path ahead is a journey without printed timetables and well-known stations. Horten has been forced to retire after 40 years of traveling a very stable rail. His orderly, solitary existence is about to give way to a future of unlikely adventures and puzzling dilemmas. Proof positive that there is humor to be found in aging. O’HORTEN is Bent Hamer’s wonderfully skewed view of the human condition and gives us that somewhat absurdist vision with great warmth, a little melancholy and universal appeal.
In Norwegian with English subtitles.
WINNER: Flanders Int. Film Festival Best Director
â€œWARM, WHIMSICAL, WITH ITS OWN WAY OF LOOKING AT THE WORLD, “O’Horten” is a film made with impeccable delicacy and tact in all departments!â€
-Los Angeles Times
â€œMETICULOUSLY CONSTRUCTED and Keatonesque!â€-New York Times
For tickets click HERE