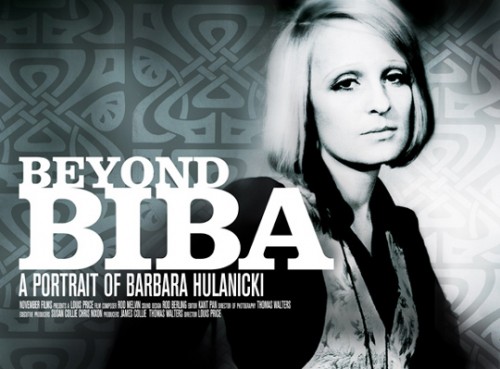 11 FRI 8:30pm:
AN EVENING WITH BARBARA HULANICKI
and Producer JAMES COLLIE in attendance!
USA PREMIERE, with reception!
and 12 SAT, 13 SUN, 14 MON 7:15pm:
Beyond Biba
A Portrait of Barbara Hulanicki
(Directed by Louis Price/UK/2009/55min)
Produced by Thomas Walters & James Collie
Barbara Hulanicki will always be remembered for BIBA, the shop that changed the face of UK fashion in the 1960s and 70s. BIBA would leave an indelible mark on the minds and wardrobes of the customers who ventured through its doors. Following its closure in 1975, many have attempted to reproduce the magic. All have missed the key ingredient: the involvement of its creator, Barbara Hulanicki. The legendary career of Barbara entered a new phase in 1987, when she completely reinventing herself as an interior designer in Miami. Hulanicki was at the forefront of the regeneration of Miami Beach, collaborating with Island Records founder Chris Blackwell. Barbara Hulanicki is now respected across the world as a major figure in design.
Barbara Hulanicki and producer James Collie will be present for introduction and Q&A after the film on Friday, with a reception to follow. Come celebrate with us!
For tickets click HERE