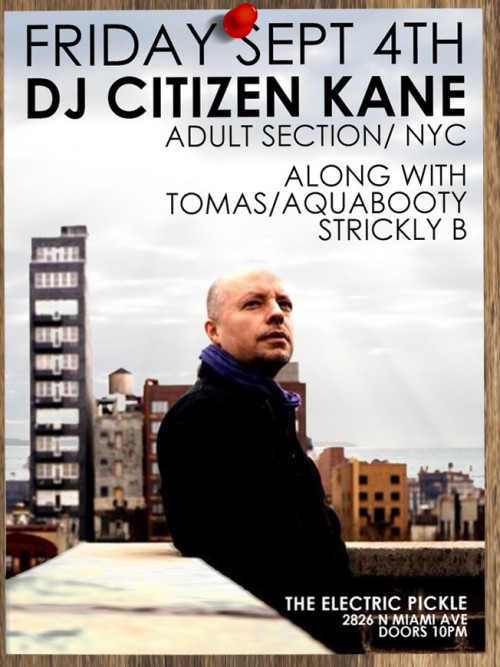 Dennisâ€œCitizenâ€Kane has been a seminal and iconic figure in contemporary dance music culture since his emergence in the mid 90â€™s NYC downtown scene. A former disco and old school buyer for the infamous A1 records, Kane has been digging and collecting since his early teens in Philadelphia.
In 1999 Kane released Selects 001 (with Chairman Mao) a mix of rare Northern Soul, boogie, and disco treats. It gained significant critical praise from Journals like Urb, The Wire, and LA Weekly, and it was nominated to numerous top 10 lists, including The Village Voiceâ€™s. A follow up mix, The Greatest Part, released in 2001, went further into the realms of disco and garnered similar critical praise. In 06 Kane released Adult Section, a solo mix with numerous re-edits, that in its diversity reflects the dynamic range of his live sets. It was named one of the years 10 best by Filter magazine, and cited as an essential disco â€œmust haveâ€ by Ocean Drive magazine.
Kaneâ€™s label Disques Sinthomme had its initial release in the spring of 2007. Featuring tracks by Kane and Lodge co-resident Darshan Jesrani, the 12â€ charted throughout Europe and Japan, and has appeared on several mix compilations. The labels second release featured original work by Silver and Professor Genius, as well as remixes from Kane and Nick Chacona. Silverâ€™s track has been licensed for a forthcoming cosmic compilation helmed by Ibiza luminary Phil Mison. The record was a huge underground hit and a staple for the likes of Aeroplane, DJ Harvey and Prins Thomas. DS003 featured tracks by The Beat Broker and Lars Behrenroth with remixes from Kane and Smith & Mudd. The EP continued Disques Sinthomme’s expansion of the form of contemporary “new disco” incorporating balearic and orchestral aspects to strong rhythm tracks. Kane’s remix of Cactus Cooler was in heavy rotation especially in Europe, and was listed on several “best of” lists. In Sept. Disques Sinthomme will release an original work of Kane’s, with vocals from Liquid Liquids Sal Principato as well as a remix of Fist of Facts “First Strike”
Kane also runs the Ghost Town re-edit label. Its second release Strawberry/Love has become an indie radio favorite, featured on mix shows by (amongst others), Richard Sen and Alex Pewin. Its third release featuring arrangements by The Beat Broker is forthcoming. Kane also has tracks out on Moton (the infamous “Spanish Home”) and Homestyle labels.
Kane is co-resident at Cielo in NYC (with Metro Area’s Darshan Jesrani) their Adult Section party is in its second year. The two also throw the reknown Strobe Lodge loft parties. (www.strobelodge.com) Kane’s Deep End party ran for 81/2 years at APT in NYC and was seminal in the development of the disco revival, guests included Phil Mison, Force of Nature, DJ Harvey, Nicky Siano, Quiet Village and Danny Krivit.
Recently recovered from a near fatal bike accident, Kane resides in NYC, with his wife Karen and son Roan Mingus. When not touring, digging or working in the studio, he is either DJ’ing, painting, or making risotto. He dreams of the old New York daily.
Rsvp for MCD – tomas@aquabooty.com