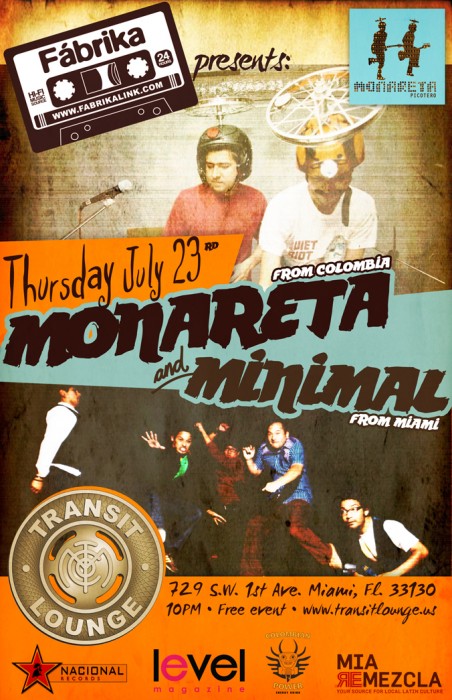 Monareta is one of the most original electronic bands from Colombia with a mashup/beat-tripping style.

“The Colombian-born team have been churning out their style of danceable electro-cumbia and breakbeat since 2000, influenced both by their home country and Brooklyn’s electro scene; their new album proves just as cutting edge.” – RCRD LBL

â€œMonareta has worked hard to stay ahead of the curve with its cinematic sounds indebted to ’80s breakdance and hip-hop and the street culture of their native Bogota.â€ – BOSTON GLOBE / â€œNine to watch in â€˜09â€

This is the first time comes to Miami and what better band to welcome them than Minimal who recently released “Hermoso Caos” and just came from a long week of performances during the LAMC in New York City.

This is a “MUST” show to let your ears hear some fresh music!
Free event â€¢ 10PM
Transit Lounge – Miami
More Info