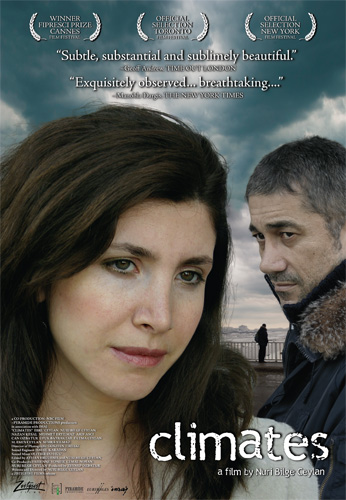 Winner of the prestigious FIPRESCI Award at Cannes, Climates is Nuri Bilge Ceylan’s sublime follow-up to his Cannes multi-award winner Distant. Beautifully drawn and meticulously observed, the film vividly recalls the cinema of Antonioni with its poetic use of landscape and the incisive, exquisitely visual rendering of loneliness, loss and the often-elusive nature of happiness. During a sweltering summer vacation on the Aegean coast, the relationship between middle-aged professor Isa (played by Ceylan himself) and his younger, television producer girlfriend Bahar (Ceylan’s real-life wife) brutally implodes. . .
WINNER: Cannes Film Festival FIPRISCI Prize
Istanbul Int. Film Festival Best Turkish Film of the Year
â€œA MASTERPIECE!…Ceylan takes the crispness of Hi-Def and transforms it into the perfect reflection of the characters’ cool distance.â€-Indiewire
â€œEXTRAORDINARY!. . .ONE OF THE WORLD’S MOST ACCOMPLISHED FILMMAKERS!â€-The Village Voice
Come help us say goodbye to our intern Rafa, from Spain!
Tonight is his last night, after seven months with MBC as part of a cultural exchange program with the Spanish Cultural Affairs Office.
Viva EspaÃ±a!
For tickets click HERE