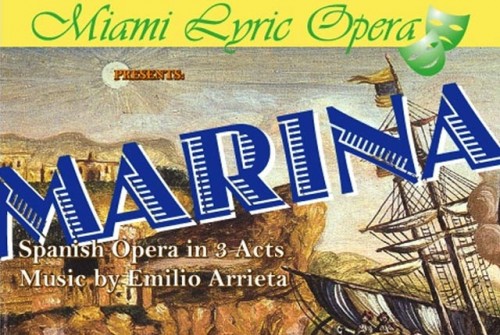 Miami Lyric Opera presents Marina, a Spanish opera in three acts set to music by composer Emilio Pascual Arrieta and lyrics by Francisco Camprodon, under the artistic direction of Raffaele Cardone. The cast will include Beverly Coulter, Maruchi Urquiaga, Aurelio Gabaldon, Hugo Marcos, Lilo del Campo, Diego Baner, Ismael Gonzalez and other fine artists. Alfredo Munar will conduct the MLO Orchestra and Pablo Hernandez will be Chorusmaster.
Marina, the orphaned daughter of a merchant captain, awaits the return of Jorge, the man who took her in after her father’s death. She is in love with him, but as he is older and her guardian, she has never dared tell him the truth. Upon Jorge’s returning from a trip, Pascual loses no time in telling him that he intends to get married, who responded that he has had the same thought, so why don’t they marry on the same day? Pascual names Marina, to Jorge’s shock and consternation. Marina is equally hurt that Jorge apparently wants to marry someone else.
One day Pascual intercepts a sailor bringing a letter from Marina’s father that wrote before dying asking Alberto to give to her. The letter included her father’s declaration of eternal love and that leaps Pasqual to the obvious conclusion, denounces Marina bluntly, breaks off the engagement and cursing rushes away. Jorge appears, and soon understands Pascual’s mistake and the innocent identity of the letter writer. When he hints he will be leaving tomorrow, Marina can no longer avoid telling him the identity of the man she really loves, and they admit their love for one another.
Emilio Pascual Arrieta (1821 – 1894) was born in Puente la Reina, Navarre, and died in Madrid. His Italian training led him, under the favour of the Queen Isabel II, to concentrate on operatic writing; and though he later composed zarzuelas he remained less committed to the renascent art form than his contemporaries such as Francisco Asenjo Barbieri, continuing to write in an essentially Italianate style throughout his life. The 1887, through-sung and rewritten opera version of his zarzuela, Marina, is one of the most popular lyric stage work in the Spanish repertoire.
Miami Lyric Opera
305.297.3619
miamilyricopera@bellsouth.net
www.miamilyricopera.org