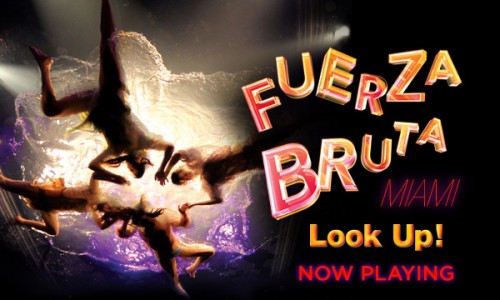 “A sexy, heart-pounding fantasy. Not many shows can boast that they deliver something you’ve never seen before. This one does.” – New York Daily News

LOOK UP â€” and experience a non-stop collision of dynamic music, jaw-dropping acrobatics, visceral emotion, and kinetic aerial imagery that resembles nothing less than a mash up between aerial theater and a late-night dance party!

From the creators of the smash-hit De La Guarda, Fuerza Bruta will transform the Lynn Wolfson Stage into an alternate universe with flying dancers, pumping beats, engaging dream sequences and a multidimensional swimming pool above the heads of the audience. The visuals are spectacular! The effects are stunning!

Add to your experience – party before and after the show (Drinks and food available!) in the G-Lounge by Barton G.!

Adrienne Arsht Center for the Performing Arts of Miami- Dade County is thrilled to announce the Miami premiere of the international hit Fuerza Bruta, a non-stop collision of dynamic music, visceral emotion, and kinetic aerial imagery that resembles nothing less than a fantastic mash-up between aerial theater and a late-night dance party.

Beginning June 9, the Lynn Wolfson Stage inside of the Adrienne Arsht Centerâ€™s Sanford and Dolores Ziff Ballet Opera House will be transformed into an alternate universe with flying dancers, pumping beats, engaging dream sequences and a multidimensional swimming pool above the heads of the audience.

Fuerza Bruta opens officially on June 11, with preview performances June 9 and 10, and will be on stage for a limited 4-week engagement.

â€œMore than 130,000 people enjoyed a performance at the Center last summer. With the presentation of Fuerza Bruta beginning in June, the Adrienne Arsht Center brings to Miami a show that will rock South Florida – a cutting-edge performance that has been a hit all over the world,â€ said M. John Richard, president and CEO of the Adrienne Arsht Center.

Breaking free from the confines of spoken language and theatrical convention, Fuerza Bruta is an event where worlds collide and reality takes a back seat. This heart-pounding theatrical experience takes place completely on the Lynn Wolfson stage and begins the moment audiences walk in through the Centerâ€™s loading dock (dubbed the â€œMedia Dockâ€) into the Fuerza Bruta lounge â€“ a hip urban space alive with heart-pounding club music directed by Miamiâ€™s best DJs, multimedia art installations created by local artists, and a signature Barton G. restaurant inspired by the show.

At show time, audiences are ushered onto the main stage where they are engulfed in a 360 degree spectacle featuring mind-blowing visual effects just inches above the audience that must be seen to be believed – a man running full throttle on a giant treadmill, bursting through a series of moving walls; performers suspended in mid-air surrounded by a vast sea of mylar; and gorgeous women twisting ethereally in a lucite pool above the audience. Argentinean creative genius Diqui James, one of the creators of the smash hit show De La Guarda, created the original scenes and magnificent customized staging exclusively for the Miami engagement.

As the performance winds down, the visual and aural party continues in the Fuerza Bruta lounge. The pre- and post-party lounge is open to the general public.

â€œThe audience experience will be unlike any other presentation at the Adrienne Arsht Center. From the unique entrance through the loading dock and onstage experience to the interactive pre- and after-party components, Fuerza Bruta will be the talk of the town this summer,â€ continued Richard.

Tickets for Fuerza Bruta are now on pre-sale for Arsht Center members. To become a member today, please call 305.949.6722. Tickets are on public sale.

Adrienne Arsht Center for the Performing Arts of Miami-Dade County is made possible by the public support of the Miami-Dade County Mayor and the Board of County Commissioners, the Miami-Dade County Department of Cultural Affairs and the Cultural Affairs Council, and the Miami-Dade County Tourist Development Council. Education & Outreach is funded in part by The Childrenâ€™s Trust. The Adrienne Arsht Center also receives generous support from private and corporate contributions to the Performing Arts Center Foundation of Greater Miami through its Membership Program; City of Miami Omni Community Redevelopment Agency; American Express; Dade Community Foundation; The MAP-Fund, a program of Creative Capital, supported by the Doris Duke Charitable Foundation and the Rockefeller Foundation; The Andy Warhol Foundation for the Visual Arts; the State of Florida, Department of State, Division of Cultural Affairs; the Florida Arts Council; the National Endowment for the Arts; and the John S. and James L. Knight Foundation.

County Adrienne Arsht Center for the Performing Arts of Miami-Dade County is Miami-Dade Countyâ€™s largest ever public/private-sector partnership, comprised of an $150 million private capital campaign conducted by the Performing Arts Center Foundation and public funding drawn primarily from the Countyâ€™s Convention Development Tax revenues, as well as the City of Miami Omni Redevelopment District Community Redevelopment Agency. Greatly enhancing the artistic and educational opportunities in South Florida, the Adrienne Arsht Center will have significant and long-term economic benefits for the city and the region.

The Adrienne Arsht Center, designed by the world-renowned architect Cesar Pelli of Pelli Clarke Pelli Architects, includes the 2,400-seat Sanford and Dolores Ziff Ballet Opera House, the 2,200-seat Knight Concert Hall, a 200-seat black box Carnival Studio Theater, the Peacock Education Center, a restored Art Deco Tower, and the Parker and Vann Thomson Plaza for the Arts, which unites the Center buildings across Biscayne Boulevard, providing a magnificent setting for outdoor entertainment and informal gatherings. The key members of the design team include theater planning and design consultant Joshua Dachs of Fisher Dachs Associates, Inc. and acoustician Russell Johnson of ARTEC, Inc., both of whom worked of the project since its inception. The Adrienne Arsht Center is a Miami venue not only for its four resident companies (Florida Grand Opera, Miami City Ballet, and New World Symphony), but also for many smaller South Florida arts organizations that will perform in its theaters on a regular basis, as well as for the finest popular and classical performances from around the world. With state-of-the-art performance facilities in Miami for the first time, the Adrienne Arsht Center offers South Florida audiences the best and most diverse theater, music, and dance â€“ with a dedication to entertain, challenge and educate all segments of the community. For more information, visit www.arshtcenter.org.

About S2BN Entertainment: S2BN Entertainment is a diversified international family show and event entertainment company specializing in the acquisition, development and production of high caliber touring exhibitions, unique live music tours and events, theatrical performances, and consumer and multimedia product offerings. Our experienced management team executes activities across all types of global venues â€“ from stadiums to theaters. S2BN Entertainment delivers solid profitability while providing extraordinary experiences for our clients and our customers.