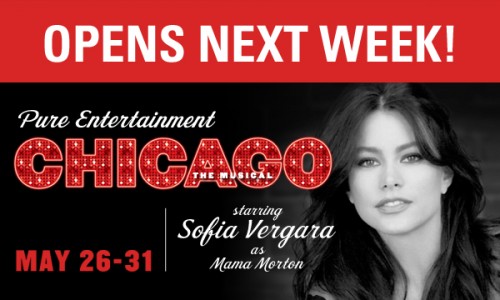 “Chicago has no peer on Broadway in matters of wit, style and sheer musical riches,” says Variety. It’s a razzle-dazzle tabloid tale that has won six Tony AwardsÂ®, two Olivier Awards, a Grammy and thousands of standing ovations throughout its record-breaking run in New York and around the world. See the show, live on stage, that sparked the Oscar-winning movie!

JUST ANNOUNCED!
Sofia Vergara, one of the hottest Latina stars of stage, film and TV, will star in the Miami engagement of CHICAGO! Read her letter to her fans here!

As one of the most beloved personalities of the Latino entertainment world, Vergara will bring major heat as â€˜Matron Mamma Mortonâ€™ in this award-winning musical. Vergara is featured in the current box office smash Tyler Perryâ€™s Madea Goes to Jail and her credits also include the female lead in the film Four Brothers, directed by John Singleton, and starring Mark Wahlberg; Chasing Papi, opposite Eduardo VerÃ¡stegui; and the steamy 2008 telenovela â€œFuego en la sangre.â€ Her TV guest appearances include â€œEntourage,â€ â€œEve,â€ â€˜Baywatch,â€ â€œPunkâ€™d,â€ and numerous talk shows including, â€œJimmy Kimmel Live!â€ â€œDon Francisco presenta,â€ â€œLate Night with Conan Oâ€™Brien,â€ â€œDespierta America,â€ and â€œLast Call with Carson Daly.â€