MOSS at DESIGN MIAMI, part one: BAVARIA
At Design Miami 2008, Moss will unveil Bavaria, a spectacular new suite from Dutch design team Studio Job. This collection of five marquetry furnishings in Indian Rosewood features intricate and fine multi-colored laser-cut inlays in a bucolic farm motif. With its brightly-coloured symmetrical, â€˜book-matchedâ€™ inlays, the pieces depict bountiful scenes of farm life, including red barns and silos, horse corrals and dog houses, sunflowers, vegetables, pigs, chickens, and other such iconography. While inspired by 17th and 18th century Bavarian hand-painted furniture and embracing the age old technique of marquetry, Studio Job employed modern technology to laser cut the inlays to achieve a flawlessly executed design and an almost seamless surface. The collection is offered in a limited edition of six pieces per model exclusive internationally to Moss. 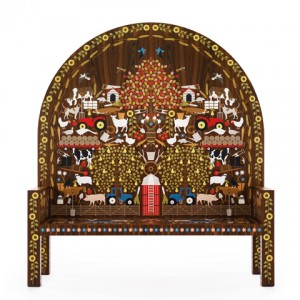 Nynke Tynagel and Job Smeets of Studio Job offer Bavaria fresh off the heels of critical and commercial debuts of 2007 which included â€œHomeworkâ€ a series of seven bronze sculptures, and â€œRobber Baron,â€ five monumental bronze furnishings introduced by Moss at Design Miami 2007. Studio Job was the subject of â€œBoldâ€ the design teamâ€™s first retrospective at the inaugeral exhibition of the design museum Designhuis in the Netherlands and at the â€œZ33â€ exhibition in Belgium. They were the solo focus of Mossâ€™s selection for Design Miami/Basel where pieces from â€œRobber Baron,â€ â€œPerishedâ€ and the complete suite of â€œHomeworkâ€ were exhibited. The marketplace has responded to Studio Jobâ€™s signature of blurring lines between art and design as well, with their inclusion, along with works by Ron Arad and Shiro Kuramata, in Christieâ€™s London Fall auction of blue chip contemporary fine art, â€œPost War & Contemporary Artâ€ sale, the first time Design was included in such a sale.
For more more information about Bavaria, click here.
And stay tuned for Moss at Design Miami part two: the Campana brothers.
Moss Gallery of Art and Design
Design Miami, Booth #16
December 3 – 6

Fernando and Humberto Campana have been awarded Designer of the Year by Design Miami, placing them in the company of previous winners Zaha Hadid, Marc Newson and Tokujin Yoshioka.
The designation is a reflection of the tremendous success the Campanas have had in recent years in both the academic world and in the market for limited edition studio design.
As the exclusive representative of work by the Estudio Campana in North America, Moss has selected works for presentation at Design Miami 2008 which reflect not only some of the most important works they have produced but also typify our long standing collaborative relationship. This shared vision has resulted in works such as a special 34 piece installation of Campane di Campana, a historic project orchestrated by Murray Moss between the Campanas and the Murano glassmaker Venini. Also on exhibition are exclusive variations on two of their most indelible creations, â€œFavelaâ€ and â€œCorallo,â€ created for Moss in 2004. Additional works include the â€œPanda Chairâ€ from the celebrated â€œBanquetteâ€ series, and selections from the acclaimed â€œSushiâ€ series.
For more more information about the Campana brothers, click here.
Moss Gallery of Art and Design
Design Miami, Booth #16
December 3 – 6 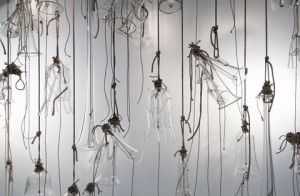