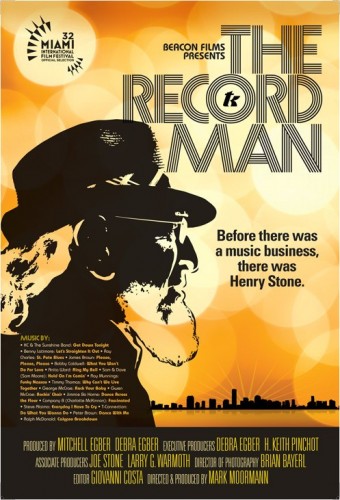 Due to high demand for tickets, there will be an additional screening of The Record Man at the Miami International Film Festival.

“Before there was a music business there was Henry Stone who shaped and catapulted the sound of 1970s Miami into the mainstream with his unique hit-breaking label TK Records and affiliates. Stone started out in the music distribution business which led him to establish his own independent music label which he ran from a warehouse in Hialeah. TK Recordâ€™s first big international hit was George McCraeâ€™s Rock Your Baby in 1974, one of the songs credited to starting the disco revolution. The hits kept coming and by the end of the 1970s the label had several #1 songs in the Billboard Top 100 chart like Get Down Tonight and Thatâ€™s The Way (I Like It) by KC and the Sunshine Band and Anita Wardâ€™s Ring My Bell. Not long after the disco era was over TK Records went bankrupt, but Stone still had one last piece to add to the Miami music sound puzzle when he helped release what would become the first million seller freestyle hit record Fascinated by Company B and the rest is legit Miami music history.”- Andres Castillo