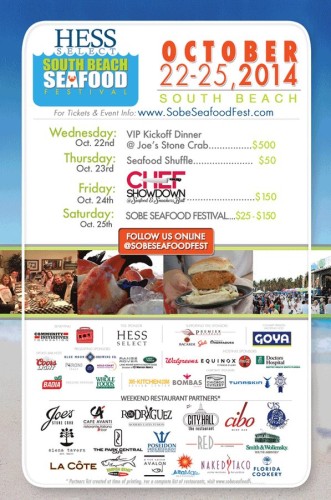 Crack Open Your Fall with the 2nd Annual Hess Select South Beach Seafood Festival, taking place on Saturday, October 25, 2014 from 1:00PM to 9:00 PM. The event will feature a delightful mix of the very best of what South Florida has to offer event goers in the areas of entertainment, wine & spirits, and culinary scene all to support the Community Initiatives Foundation and their new EAT SMART Campaign.

The CI Management team has worked diligently to create an experience not to be forgotten and most definitely will not disappoint, as they provide South Florida locals and visiting â€œfoodiesâ€ an opportunity to enjoy signature seafood from multiple premier local restaurants.

Over 6,500 seafood-lovers supported the newest culinary event of the year, now considered one of Miamiâ€™s annual â€œdo not missâ€ festivals. Guests agreed after attending last year that the perfect equation was created, one comprised of the beautiful ocean, amazing food and lots of great activities to partake in. The festivities will return again this year with some great new satellite event additions throughout the festival week to please even the most discerning of tastes. Be sure to check out ticket information for the VIP Kickoff Dinner at Joeâ€™s Stone Crabs Wednesday Night, Thursdayâ€™s Seafood Shuffle down Ocean Drive, and the Friday, October 24 â€œChef Showdownâ€ at the Seafood & Sneakers Ball hosted in the Goya Culinary Pavilion. Participating chefs and restaurants for the Chef Showdown will be announced shortly.

The Hess Select South Beach Seafood Festival invites you to come out with friends and enjoy this yearâ€™s event. Donâ€™t forget, you can bring the kids too as Goya hosts the â€œlittle chefsâ€ in the Goya Kids Zone for a great day of family fun!