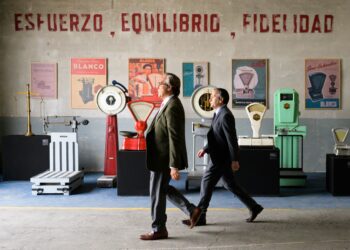 Bring your work colleagues, boss and friends to Miami Dade College’s (MDC) Tower Theater Miami for the theatrical release of the Spanish comedy film, “The Good Boss” directed by Fernando León de Aranoa and starring Javier Bardem, followed by an Opening Night Reception at 7 p.m. on Friday, September 2. All movie ticket holders can enjoy the free reception courtesy of famous Spanish beer Estrella Damm and talk about the film with the programmers and fellow audience members. 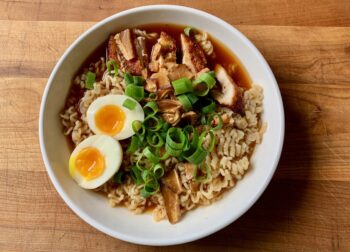 Join us as we roast, chop, season and simmer our way to the perfect Chicken Ramen Bowl! This delicious menu includes gently roasted chicken, homemade broth, fresh veggies, lots of noodles and a perfectly soft boiled egg. To top it off, we’ll whip up a batch of steamed Bao stuffed with crispy pork and topped with crunchy pickled veggies. Bring your friends, your favorite wine, and get ready for some Asian comfort food! 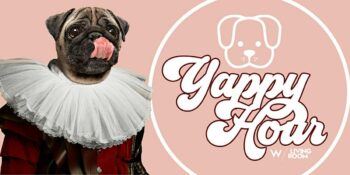 Get ready for W Fort Lauderdale’s first ever “Yappy Hour” for four-legged friends and their hoomans, this Friday, August 4th from 5-8 PM. Here, dogs will get the royal treatment with Dog Champagne, Pawdicures and a Pup-Up Boutique. Hooman guests can look forward to mixology-driven craft cocktails and stunning 180 degree views of Fort Lauderdale Beach from the hotel’s Living Room Terrace. 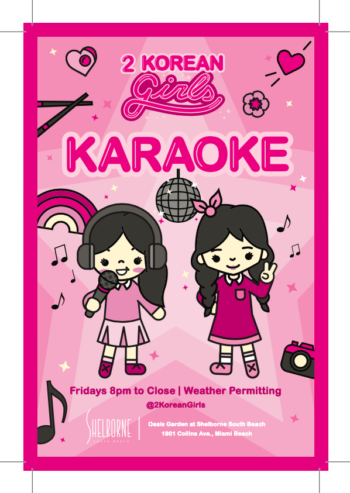 Get your groove on at 2 Korean Girls for their weekly karaoke Friday’s from 8 p.m. to close at the Shelborne South Beach. This new and exciting weekly event will gives diners the opportunity to belt their hearts out to favorites such as ABBA’s “Dancing Queen” but also dine on contemporary twists on Korean cuisine menu items include: Korean Short Ribs (Galbi), Korean Melon Salad, as well as Tteokbokki. Guests can also enjoy an extensive cocktail menu created by mixologist Alexa Delgado, that includes 2KG’s signature cocktail, The Last Imoogi, a bright pink dragon fruit-infused Bacardi rum cocktail served with a swirl of rose gold shimmer, domaine de canton, citrus, orange bitters and beautifully garnished with an edible flower. Can’t wait to see you there! 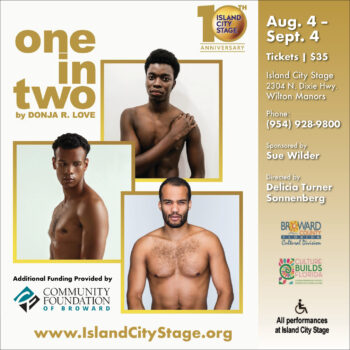 Three actors sit in an ethereal waiting room. Each performance, the audience chooses which actor must portray the lead character of a Black man diagnosed with HIV in Island City Stage’s newest production of “One in Two,” by Donja R. Love. This compelling story, an unflinching portrait of being Black and gay in America today, will run from August 4 – September 4, 2022. “One in Two” is the last production of the award-winning theater company’s 10th Anniversary 2021-22 South Florida Season.

Directed by San Diego’s Moxie Theatre co-founder and NAACP theatre award-winner Delicia Turner Sonnenberg, “One in Two” refers to the current HIV projection rate that 1 in 2 black men who have sex with men (MSM) and 1 in 4 Latino MSM in the United States will be diagnosed with HIV during their lifetime, according to a 2016 analysis by researchers at the Centers for Disease Control and Prevention (CDC). Unlike other plays, in this production, the audience chooses nightly which actor must portray the fated lead character.

Randall Swinton is a local South Florida talent who does double duty onstage as an actor and as technical crew behind the scenes and backstage. Swinton has appeared as Joey Biltmore in “Guys and Dolls” (MNM Theatre), Cliff in “Luna Gale” (Boca Stage), Sticks Pig in “Shrek the Musical” (Slow Burn Theatre), Arvin in “Zanna, Don’t!” (Island City Stage) and as Harold Smith in the interactive crime mystery show “The Art Heist Experience” (Right Angle Entertainment). He is excited to be working with Island City Stage, once more.

Nathaniel J. Ryan has appeared on both stage and screen. His most recent stage credits include ”Topdog/Underdog” and “Fences” among many others. His film and television credits include “The Blacklist,” “Blue Bloods,” “Random Acts of Flyness” and the independent feature film “Luv Don’t Live Here.”

“One in Two” is sponsored by Sue Wilder with additional support from Community Foundation of Broward, the Broward County Cultural Council and Florida Department of State Division of Arts & Culture.

Island City Stage’s 10th anniversary 2021-22 season kicked off with “The Twentieth Century Way” by Tom Jacobson in October, followed by “Armature” by Andrew Kramer and “Suddenly Last Summer” by Tennessee Williams and “The Mystery of Irma Vep: A Penny Dreadful” by Charles Ludlam. “One in Two” by Donja Love is the company’s final season performance.

Island City Stage is located at 2304 N. Dixie Highway in Wilton Manors. Show tickets are $35 each and are available at islandcitystage.org/one-in-two.