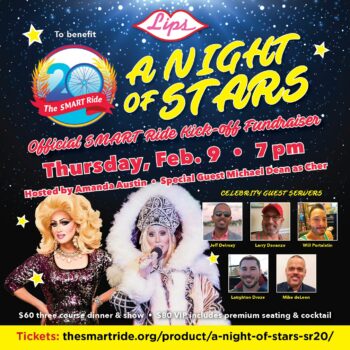 Lips
1421 East Oakland Blvd.,
Fort Lauderdale, Florida, 33334
Website
Cost: Tickets are $60 per person, which includes a three-course dinner with soft drinks, gratuity and the show cover charge. An $80 VIP level enjoys the same, plus premium seating and one complimentary drink.

“A Night of Stars,” a fundraiser for the 20th anniversary annual SMART Ride (Southern Most AIDS/HIV Ride 2023) presented by CAN Community Health, returns to Lips, the ultimate in drag dining, on Thursday, February 9, at 7 p.m.! Enjoy a full-out evening of gorgeous glitz and glam and outrageous humor hosted by Amanda Austin with a special performance by Michael Dean as Cher, featuring celebrity guest servers Jeff Delmay, Larry Davanzo, Will Portalatin, Laughton Droze, and Mike DeLeon “dragging” it out for this charitable cause.

The SMART Ride is a two-day, 165-mile bicycle ride from Miami to Key West. This year’s 20th anniversary annual event will take place November 17 and 18. The SMART Ride’s ongoing journey is to improve lives of those already affected by HIV/AIDS and to fund education, awareness and prevention to help reduce the new incidences of infection.

Five celebrity guest servers in drag or costume will be greeting guests and dishing out great food and fun alongside Lips’ very own entertaining cast of characters. The dynamic five have been chosen for their commitment to the annual bicycling event, and they will camp it up table-by-table to earn extra tips for the cause.

Lips will present its popular divas impersonator show with is inimitable mistress of ceremonies Amanda Austin. Lips leading ladies will entertain along with a special guest appearance by Michael Dean as Cher. An in-demand entertainer who brings the magic of Cher to every performance, Michael Dean as Cher has performed around the country for charitable and corporate events, dinner shows, expos and pride parades. He also enjoyed a two-year engagement alongside an impressive roster of leading celebrity impersonators at Oscar’s Cabaret in Palm Springs, California.

“We are thankful for Lips’ continued support of SMART Ride, which benefits several statewide organizations committed to helping those affected by HIV/AIDS,” said Glen Weinzimer, founder of SMART Ride. “Our friends and sponsors look forward to this annual event, so we applaud Lips for being such a loyal supporter.”

Reservations are required for Lips’ “A Night of Stars” to benefit SMART Ride. Tickets are $60 per person, which includes a three-course dinner with soft drinks, gratuity and the show cover charge. An $80 VIP level enjoys the same, plus premium seating and one complimentary drink.

This year’s SMART Ride is made possible through the generous support of title sponsor CAN Community Health, Lips, GPR | Goodman Public Relations and other charitable organizations and individuals.

To reserve your seats for Lips’ “A Night of Stars” in support of SMART Ride, visit https://thesmartride.org/product/a-night-of-stars-sr20/ or email info@thesmartride.org.

Downtown Doral & The City of Doral invite you to join us for a romantic evening under the stars where couples will be able to experience a wonderful pre-fixed menu at any of our five participating restaurants, and a stunning rooftop concert atop the newly completed Doral Cultural Arts Center by an acclaimed local violinist Ronny Moreno.

SCHEDULE FOR THE EVENING: 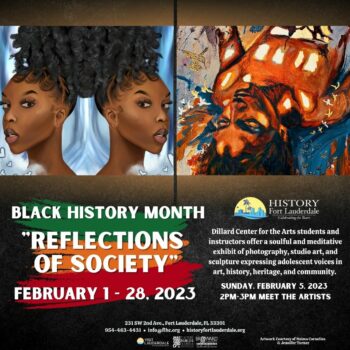 History Fort Lauderdale
231 SW Second Avenue,
Fort Lauderdale, Florida, 33301
Website
Cost: Admission is $15 for adults; $12 for seniors and $7 for students (through age 22 with a valid student ID). Admission is free for members, military and children ages six and under.

In honor of Black History Month, History Fort Lauderdale, celebrating 60 years of stewardship of our community’s past by making our heritage accessible and engaging to residents and visitors, will present “Reflections of Society,” a fine art exhibit featuring works for show and sale from Dillard Center for the Arts’ Advanced Placement (AP) students and instructors, from February 1 – 28. Curated by instructor Celestin Joseph, the soulful and meditative exhibit of photography, studio art, and sculpture expresses adolescent voices in art, history, heritage and community. A meet and greet with the artists will take place on Sunday, February 5, from 2 p.m. to 3 p.m., at the New River Inn Museum of History building on History Fort Lauderdale’s campus.

“Reflections of Society,” will feature a variety of styles and mediums reflecting African American culture, arts and entertainment as viewed through the lens of youth. Featured pieces in the exhibition include works by AP students Angel Pena, Naima Cornelius, C. Joseph Ellie, Lewis James and Jennifer Turner, among others.

“Reflections of Society,” is one of several engaging multicultural experiences at History Fort Lauderdale. Permanent exhibits include “Women Trailblazers: Champions of Change Broward County,” “From Dugouts to Dream Yachts,” a visual narrative weaving the story of the ever- changing use of Fort Lauderdale’s waterways by following the strokes of the first people to today’s sightseers, “The Bryans of Fort Lauderdale” which allows visitors to experience the story of the City of Fort Lauderdale as told through the pioneer family that shaped its development from an agricultural outpost in 1896 to a bustling city in the 1920s to its current status as a leading Metropolis, “Juliette Lange: A Portrait of a Mezzo Soprano,” a fashion and lifestyle glimpse of the socially prominent Fort Lauderdale resident with a lauded career as a star vocalist of musical comedy, plus “Archaeology of the New River” and a multitude of stories and photos sharing the history of other founding families of Fort Lauderdale. The nonprofit museum also hosts a variety of yearly multicultural exhibits highlighting Caribbean, Latin, Native American and women artists sharing their views of history and an artists’ collective collaborative space.

History Fort Lauderdale is open seven days a week from 10 a.m. – 4 p.m. with docent guided tours, daily, at 1, 2 and 3 p.m. Group walking tours are available upon special request. Admission is $15 for adults; $12 for seniors and $7 for students (through age 22 with a valid student ID). Admission is free for members, military and children ages six and under. Tickets are available online at HistoryFortLauderdaleTickets. 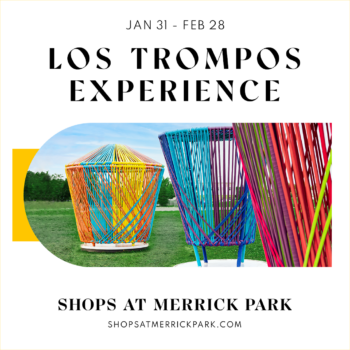 Shops at Merrick Park, known for its pristine outdoor shopping with lush green spaces and a fine collection of retailers in the heart of Coral Gables, will be the perfect backdrop for the world- famous Los Trompos art exhibition created by Mexican designers Héctor Esrawe and Ignacio Cadena. This interactive vibrant outdoor display will make its South Florida debut from January 31 through February 28.

“Los Trompos,” which means “spinning tops” in Spanish, is a traveling exhibit that has been displayed in cities around the world, including Mexico City, Paris, and New York. The lively installation will feature eight larger-than-life, three-dimensional colorful spinning tops in a variety of colors and shapes that invite visitors to play and engage with the art. The art draws its inspiration from a toy that has been popular with children around the world since the dawn of time.
The colorful surfaces of each top are created, in part, by fabric woven in a traditional Mexican style. The fabric is stretched over the modules to seat several people at once. Functioning as both artwork and a rotating platform, each sculpture acts as a gathering place for relaxation, social interaction and entertainment.

This large-scale, artistic installation engages visitors in a way that is both meaningful and playful. By working together to create momentum, visitors can spin the tops on their bases.

Los Trompos at Shops at Merrick Park is free to attend (no ticket required). Visitors are encouraged to take the tops for a spin, sit back and relax, or pose for the perfect photo opportunity. The exhibit is suitable for all ages.

Any way you spin it… you won’t want to miss this! For more information visit www.shopsatmerrickpark.com/en/events/los-trompos.html 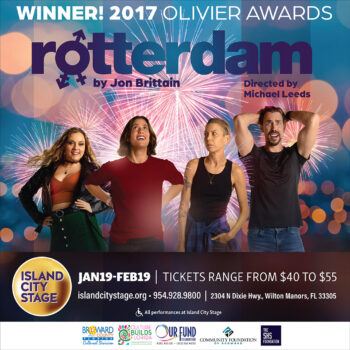 Alice wants to come out as a lesbian. Her girlfriend Fiona wants to start living as a man. In Island City Stage’s new production of Rotterdam by Jon Brittain, audiences journey to find out what happens next in this modern comedy about gender, sexuality, and being a long way from home. Rotterdam runs from January 19 – February 19.

Rotterdam, a new play from Jon Brittain, co-creator of Margaret Thatcher, Queen of Soho, writer of What Would Spock Do? and The Sexual Awakening of Peter Mayo, is a moving and sensitive exploration of gender identity and relationships. It shares the story of lesbian couple Alice, who is struggling to come out to her parents, and Fiona, who tells Alice that she has always identified as a man.
Directed by Michael Leeds and co-produced by Sue Wilder, Rotterdam stars Suzanne Ankrum as Alice and Autumn Kioti Horne as Fiona. It also features Abbie Fricke as Lelani (in her Island City debut performance) and Robert Koutras as Josh.
Suzanne Ankrum’s recent regional credits include Palm Beach Dramaworks production of A Streetcar Named Desire, WAM Theatre’s Emilie: La Marquise du Chatelet…, Majestic Theater’s Crimes of the Heart, New Century Theatre’s The How and the Why, Clarence Brown Theatre’s Woyzeck, The Merry Wives of Windsor, Tartuffe, and A Christmas Carol, and Richmond Shakespeare Festival’s Twelfth Night and Henry IV, Part 2. She’s also appeared on Netflix’s
Orange is the New Black and has performed in several workshop productions from Palm Beach Dramaworks, Theatre Lab, Hartford Stage, Ivoryton Playhouse and HartBeat Ensemble.

South Florida artist and actor Autumn Kioti Horne has performed with Theatre Lab, Zoetic Stage, GableStage, Florida Stage, Caldwell Theatre, and others. In NYC, they originated the roles of Cassandra in The Hive, Veronica in She Calls Me Firefly, and others. Their interdisciplinary art has been presented in galleries/spaces throughout the U.S. and abroad including La Mama, Dixon Place, The Queens Museum and Last Frontier, and more. They have also appeared in award-winning films at Lincoln Center, Art Basel, Sci-Fi London, Palm Springs Film Festival, and more. When not onstage, they run an environmental art/education/justice program Wildness is Necessary.

Along with its Season 11 lineup, Island City Stage will be bringing back its introspective “Behind the Red Curtain” free public forum series, launched last year as an anniversary initiative to address the stories and issues that inspire its shows. Providing insight to Rotterdam, Island City Stage will present ‘‘Living the Truth – Seeing the Trans Community Through a Different Lens” on Monday, January 9, at 6:30 p.m. This forum will educate and inspire others regarding how to interact with transgender, nonbinary, and gender-diverse individuals. The discussion will open hearts and minds by sharing personal triumphs, breaking down barriers, understanding fact vs. fiction and reflecting on personal biases.

Tickets for Rotterdam start at $40. Enjoy a special Mimosa Sunday sponsored by Murl Casey on January 29 for $55 that includes a light bites pre-reception and a post-show talk back. A special Women’s Night at the Theatre will take place on Friday, February 3 with a 7 p.m. reception with light bites and beverages followed by the show. 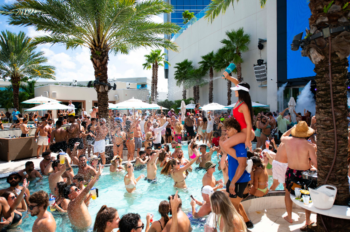 Do you have the winter blues? If you are dreaming of warm balmy breezes and electric blue skies, then DAER South Florida is the perfect winter escape for you. DAER South Florida launched its Winter Escape offer for travelers looking for warmer weather, a vibrant scene and the ultimate party experience. Now until mid-February winter visitors receive special VIP pricing of up to 60 percent off for Dayclub and Nightclub premium sections.