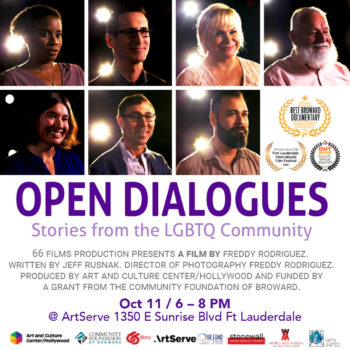 To commemorate the 33rd Annual National Coming Out Day on Monday, October 11, ArtServe will host a film screening and discussion panel for the award-winning documentary, “Open Dialogues: Stories From the LGBTQ Community,” produced by the Art and Culture Center/Hollywood.

The doors open at 6 p.m. with the public screening of the film at 6:30 p.m. and an interactive panel discussion at 7 p.m. Admission is free.

To register for the event, visit https://www.eventbrite.com/e/live-film-screening-open-dialogues-stories-from-the-lgbtq-community-tickets-175663041887 or click here. ArtServe is located at 1350 East Sunrise Blvd. in Fort Lauderdale.

“This is a film that will touch something deep in your soul. It’s poignant and very real,” said ArtServe Executive Director Jason Hughes, who will moderate the panel. “Amid each individual’s thoughts expressed in the documentary, I think you’ll find what’s most impactful is often what is not said.”

Open Dialogues: Stories From the LGBTQ Community was produced by the Art and Culture Center/Hollywood and directed by award-winning Miami-based filmmaker, Freddy Rodriguez. Community leaders interviewed in the film, Julie Marie Wade, Dan Bassett, Christine Walters, Omar Morales, Gary Keating, Franchesca D’Amore and Michael Goodman, reveal in intimate detail how the LGBTQ community is often marginalized within families, schools, churches and public spaces and how they learned to empower themselves in these spaces.

The discussion panel will feature Nicole Stodard, producing artistic director/chair of Thinking Cap Theatre and an award-winning theater artist, educator and scholar who is also the founding executive director of The Vanguard, a Fort Lauderdale-based remodeled 1939 church that now serves as a modern sanctuary for the arts; Terry Dyer, director of development for the administrative and executive department of SunServe, who was named by POZ Health Magazine as “African-American Person of the Month” for his work to stem the spread of AIDS and a bestselling author of Letters to a GAY BLACK BOY, a memoir sparking conversations around racism, inequality, homophobia and more; and Dr. Gary Keating, who is featured in the film and founder of the Fort Lauderdale Gay Men’s Chorus. His work led to the founding of 16 choruses throughout Florida that served gay men, lesbian women and their allies.

Support for Open Dialogues: Stories From the LGBTQ Community was provided by the following funds at the Community Foundation of Broward: Helen and Frank Stoykov Charitable Endowment Fund, Ruth H. Brown Fund for the Arts, Dot and Keith Cobb Fund and Mary and Alex Mackenzie Community Impact Fund.

Serving as the backdrop for this screening and inspiring panel discussion is ArtServe’s newest exhibition, “Stories From Within,” made possible by a grant from Our Fund, an LGBTQ Community Foundation. The exhibition explores LGBTQIA+ culture, history and experience in South Florida and beyond through the presentation of multidisciplinary works inspired by the LGBTQIA+ social movements, its resilience, sense of community and artistic expressions.
The exhibit was curated by ArtServe’s Sophie Bonet in conjunction with ArtsUnited, a LGBTQIA+ arts organization. It includes displays from the Stonewall National Museum & Archives, as well as the World AIDS Museum.

The exhibition runs through Saturday, October 23.
Admission to “Stories From Within” is also free. ArtServe is open to patrons Monday through Friday from 9 a.m. to 5 p.m. and Saturdays from 10 a.m. to 6 p.m.