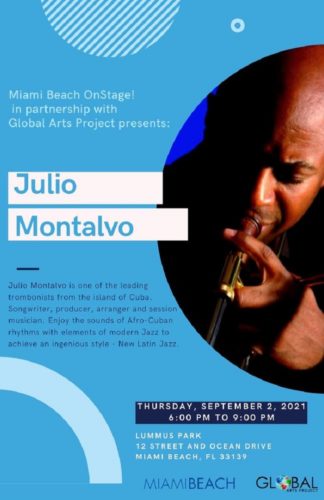 Julio Montalvo is one of the leading trombonists from the island of Cuba. Songwriter, producer, arranger and session musician, he also appears as a solo artist, directing his own project since 1998, in which he blends Afro-Cuban rhythms with elements of modern Jazz to achieve an ingenious style – New Latin Jazz.

He has collaborated with the leading stars of Pop and Rock in Spain. He won a Grammy Award for co-producing the Acoustic David Bisbal “A Night at the Theatre Royal” where he participated as co-arranger and multi-instrumentalist.

In July 2013 he created the Julio Montalvo Big Band, a 20-musician orchestra that gives us an intimate yet entertaining show, backed by musicians of the highest standard.