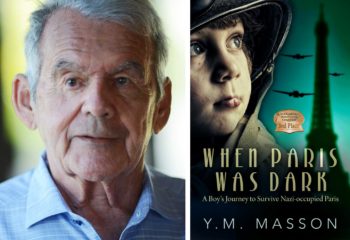 History Fort Lauderdale, proud steward of our community’s past by making our heritage accessible and engaging to residents and visitors, will feature Broward County novelist Y.M. Masson on the next June 10 noon segment of its “Meet the Author” interactive Zoom series. The new free series takes place on the second Thursday of each month. Viewers may register at http://bit.ly/HFLMeetTheAuthorMasson.

Masson is the author of When Paris Was Dark (ISBN 978-1-946886-09-5), a story of a young boy’s fear, courage, despair and determination during the World War II German occupation of France. The tale mirrors Masson’ own experiences during this turbulent time. It won third place in the Royal Palm Literary Awards from the Florida Writers Association 2018 competition.

As a young boy Y. M. Masson (Yves) struggled through four years of hardship under German occupation of Paris until he was liberated by the American Third Army. Twenty years later, after having served in the French army in North Africa during the French-Algerian war, he left France for New York City and became a United States citizen in the early seventies. After working as a marketing executive in corporate America, and then running his own consulting business, Masson turned to the arts. He is an accomplished portrait artist, but loves to share his life experiences with his readers. He knows what war does to people and especially to children. His ability to describe their daily fears, their devastating hunger, and the despair of deprivation draws his audience into their conflict.

History Fort Lauderdale is currently open seven days a week, from 10 a.m. – 4 p.m., with docent guided tours, daily, at 1, 2 and 3 p.m. Group walking tours are available upon special request. Admission is $15 for adults; $12 for seniors and $7 for students (through age 22 with a valid student ID). Admission is free for members, military and children ages six and under. Tickets are available online at HistoryFortLauderdaleTickets.