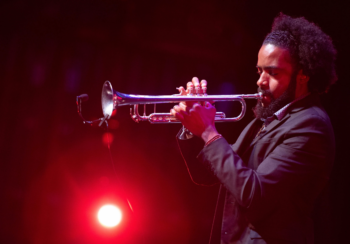 Growing up in Queens, New York, Haitian-American Jean Caze began playing the trumpet at age nine and went on to be awarded numerous scholarships while attending some of the country’s top musical institutions, including the Julliard Music Advancement Program, where he received his first formal training and the Queens College Center for Preparatory Studies in Music program.

Jean’s diverse musical abilities won him numerous awards and recognition, including a free trumpet from VH1’s Save the Music program while in Junior High School, and the opportunity to perform with the elite GRAMMY High School Jazz Band during the 2000 GRAMMY Awards ceremony. In his senior year, Caze made his debut on national television, performing with the legendary rock group “Chicago” live on NBC from Rockefeller Center.
To watch live, visit https://mocanomi.org/virtual-jazz-at-moca/
Cost: Free.