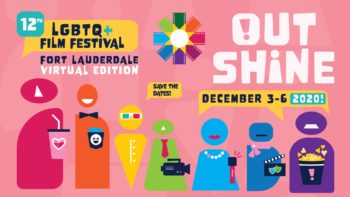 The 12th edition of the OUTshine LGBTQ+ Film Festival Fort Lauderdale, a bi-annual film festival whose mission is to unite the community through social events and LGBTQ+ media that inspire, entertain, and educate, is going virtual! Building upon the success of its Miami-based virtual film festival held online earlier this year, the Fort Lauderdale edition, presented by Gilead Sciences and Broward County, will showcase 21 world-class contemplative, comedic and creative films from 11 countries, (several making their US debuts during the streaming festival). All of the films will be made available to viewers throughout the state of Florida from December 3 – 6, 2020. The festival will also host livestreamed special events with cocktail happy hours, talent and Q & A sessions as a way to virtually tie the community together.

In keeping with social distancing guidelines and community safety, this year’s festival will feature the OUTshine Drive-OUT film Cowboys (USA), a critically acclaimed drama, on Thursday, December 4, at 7 p.m. at Pier 66 Marina (2150 SE 17th Street in Fort Lauderdale). Awarded “Outstanding Performance in a U.S. Feature” at Outfest LGBT Film Festival and “Best Screenplay” at the TriBeCa Film Festival, Cowboys stars Steve Zahn (Treme’, Modern Family, Dallas Buyers Club) as Troy, a father who tries to liberate his young transgender son by taking him to Canada, but as a frustrated female detective spearheads an investigation, she discovers that the child’s family situation is more complicated than she thought. Director Anna Kerrigan has created a powerful story that propels this modern-day western forward with an uncommon emotional veracity.

Another event of note in this year’s line-up is the Saturday, December 5, 7 p.m. free community 10th anniversary screening of BearCity (USA), an outrageous, hilarious and authentic touching portrait of a group of friends trying to get by via laughing, loving and sex-ing in New York City. A virtual cast reunion and interactive Q & A will follow the film. Other highlights include the US premiere of the romantic drama Walking with Shadows (Nigeria), the award-winning international comedy-drama Goodbye Mother (Thưa mẹ con đi) (Vietnam), the award-winning international drama No Hard Feelings (Germany) and the feature thriller Through A Glass Darkly (USA). A virtual closing awards ceremony will take place on Sunday, December 6, at 8 p.m. via Zoom.

Tickets for the 12th edition of the OUTshine LGBTQ+ Virtual Film Festival Fort Lauderdale are on sale, now, at outshinefilm.com. Prices for individual films are $7.50 each and value packages range from $37.50 to $100. Opening night drive-in tickets are $40 per vehicle. OUTshine members and annual passholders receive discounts on all packages.