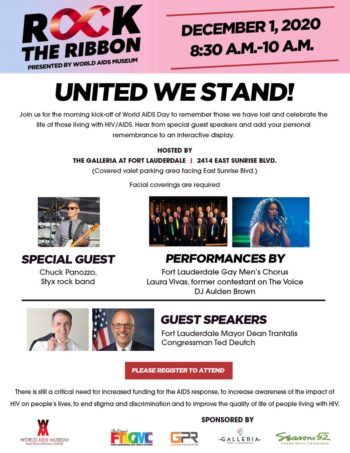 Rocking a red ribbon not only completes any outfit; it shows everyone – especially people living with HIV and their families – your support. On Tuesday, December 1 at 8:30 a.m. The World AIDS Museum and Educational Center (WAM) will present the official kick-off to World AIDS Day, founded in 1988 and themed this year as Rock the Ribbon. Hosted by The Galleria at Fort Lauderdale, the event will feature special guests Chuck Panozzo, Styx rock band member, and Laura Vivas, recording artist and former contestant on The Voice.

World AIDS Museum will gather elected officials, fellow HIV-related agencies and other stakeholders. Attendees will embrace this community gathering with special performances by Laura Vivas and the Fort Lauderdale Gay Men’s Chorus under the direction of Gary Keating. DJ Aulden Brown will add his flair to rock the crowd.

Special guest Styx rock band member Chuck Panozzo will be one of the voices heard as to why this day is so important. Charles Salvatore “Chuck” Panozzo is an American musician best known as the bass player for the rock band Styx. A longtime member of Styx, he founded the group with his fraternal twin brother, drummer John Panozzo, who died in July 1996, and singer/keyboardist Dennis De Young. He toured part-time from 1999 to 2003, and currently tours with Styx on a regular basis.

Chuck Panozzo is openly gay and has been out since 2001. That year, he also announced that he is living with HIV, and has been involved in campaigning for AIDS awareness and gay rights. In 2006, he spoke with Frontiers for the first time about his decision to come out. The following year, he released his autobiography “The Grand Illusion: Love, Lies, and My Life with Styx.”

Laura Vivas will offer a live performance that will coincide with the rock theme. Her blind audition on NBC’s hit show The Voice, Season 3, resulted in a spot on Christina Aguilera’s team. A native of Puerto Rico, Vivas’ career began at age 18 singing back-up for local artists. Since 2007, she has been the lead singer and the lone female in a six-piece South Florida cover band called Re-Mix. She has opened for artists such as Roberta Flack, Chaka Khan, Bruce Hornsby and more.

The event, sponsored by The Galleria at Fort Lauderdale, Seasons 52, Michael Murphy Photography and GPR | Goodman Public Relations, will be open to the public and take place outdoors under the covered valet parking entrance. Facial coverings will be required. Attendees are encouraged to register in advance at www.worldaidsmuseum.org.

About World AIDS Museum and Educational Center
The World AIDS and Museum and Educational Center works to promote dialogue that eliminates HIV/AIDS stigma through education, artistic expression, and cultural programming. The organization was incorporated as a non-profit 501(c)(3) organization in 2011, and the Museum facility opened to the public in May 2014. We provide prevention and education services to over 5,000 people per year in public and charter schools, community-based social services, detention facilities, and colleges and universities. The Museum includes a permanent exhibit, “The Chronology of HIV/AIDS,” and rotating smaller exhibits highlighting different aspects of the HIV epidemic worldwide. Special programs, including art exhibitions, films, and community dialogues, are offered throughout the year. For more information, call (954) 390-0550 or visit www.worldaidsmuseum.org.

About The Galleria at Fort Lauderdale
The Galleria at Fort Lauderdale, recognized as one of South Florida’s premier shopping destinations and touted as Fort Lauderdale’s most fashionable address, features a collection of popular retail and dining options. Macy’s, Dillard’s and H&M anchor the center which also is home to Altar’d State, American Eagle Outfitters, Apple, Ann Taylor, Banana Republic, Free People, J. Crew, Michael Kors and Pandora. Visitors can choose from a fine roster of dining establishments such as Seasons 52, The Capital Grille and P.F. Chang’s. Blue Martini and Powerhouse Gym can also be found at The Galleria. Just steps away from Fort Lauderdale’s world-famous beach at 2414 East Sunrise Blvd., it is minutes from the airport, port, downtown and the Greater Fort Lauderdale Convention Center with easy access from Sunrise Boulevard, U.S. Highway 1 (Federal Highway), Interstate 95, Interstate 595, and U.S. Highway A1A (Fort Lauderdale Beach Boulevard). More information about current and extended hours is available by calling (954) 564-1036 or by visiting www.galleriamall-fl.com.