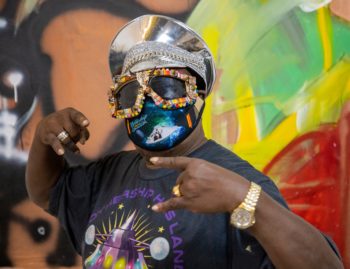 Join us for a virtual conversation and studio tour with iconic musical genius George Clinton, of Parliament and Funkadelic Records, and PAMM Director Franklin Sirmans. Clinton will share his studio space and introduce his visual art practice, including the series of work he has created in quarantine over the past six months. Get a firsthand look into the artistic world of the Godfather of Funk himself!

While the museum is currently closed to the public, this program will be offered remotely via Facebook Live and YouTube Live.

Become an Ambassador for African American Art today for an opportunity to participate in an intimate post-program conversation with Clinton. Your participation will help PAMM acquire and exhibit major works by African American artists for years to come.

George Clinton was born on July 22, 1941, and is an iconic singer, songwriter, bandleader, and record producer. Recording as both Parliament and Funkadelic, Clinton revolutionized popular music during the ’70s and ’80s with an avant-garde style that continues today. His Parliament-Funkadelic collective (which primarily recorded under the distinct band names Parliament and Funkadelic) developed an influential and eclectic form of funk music during the 1970s that drew on science fiction, outlandish fashion, psychedelia, and surreal humor. For over five decades, his unparalleled sound has been cited as the DNA of Hip Hop and Urban Culture.

As a visual artist, Clinton’s body of work is as adventurous and eclectic as his music. Early on he designed the iconic Mothership spaceship for use as a centerpiece stage prop for Parliament-Funkadelic live performances. It is now on permanent display at the Smithsonian National Museum of African American History and Culture in Washington DC.

Clinton is regarded as one of the foremost innovators of funk music. In 1977, he and Parliament-Funkadelic were inducted into the Rock and Roll Hall of Fame and then, in 2019, were honored with the pinnacle Grammy Lifetime Achievement Award.