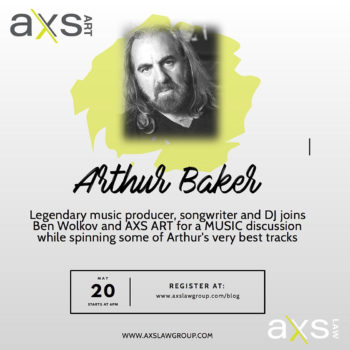 Arthur Baker is an American songwriter, producer and DJ and one of the founding fathers of both hip-hop and dance/electronica. He also introduced the art of remixing into the pop mainstream through his remixes Cyndi Lauper’s “Girls Just Wanna Have Fun”, Bruce Springsteen’s “Dancing in the Dark” and many more. Throughout his 4-decade plus career he has worked both as producer and songwriter with artists such as Afrika Bambaataa, Planet Patrol, New Order and Bob Dylan. He also co-produced the definitive hip-hop film Beat Street and has been honored by the United Nations Special Committee against Apartheid for producing the anti-apartheid anthem, “Sun City.”