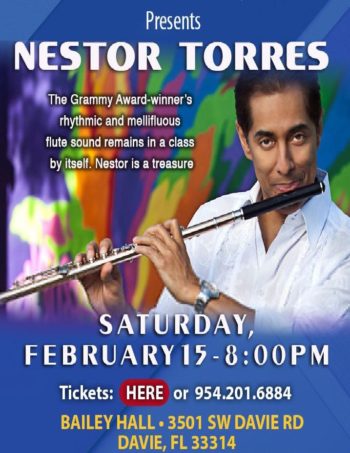 South Florida JAZZ at Bailey Hall presents the Latin Grammy Award-Winner and Flute Virtuoso NESTOR TORRES QUINTET, Saturday, February 15 at 8:00 PM. With his unique style, Puerto Rican flutist Nestor Torres will delight his audience on a magical night in which his unique sound will take them on a journey of Nestor’s greatest successes throughout his musical career. From mainstream jazz, R&B to Latin classics, Torres promises to present a musical kaleidoscope that makes each of his presentations variegated. Torres who is a native of Mayaguez, Puerto Rico, resides in both Miami and Los Angeles, and mentions that 2020 is loaded with new projects, including the release of a new classical music album, which is being produced by the Uruguayan GRAMMY-winning conductor and composer José Serebrier and Julio Bague, vice president of Peermusic. The release of a single is also approaching, where he had a special alliance with the Dominican reggaetonero Mafio, with whom Torres balances his flute skills. He will also be releasing an album of collaborations with important Latin artists in what he calls an avant-garde production.

According to Dr Ron Weber, South Florida JAZZ president and artistic director, “Nestor has retained his Caribbean roots, while exploring jazz in its many forms with intriguing fusions with other genres. While his early inspirations were Dave Brubeck, Tito Puente and Cal Tjader, his early heroes were the classical flute icons Jean Pierre Rampal and his literal ‘man with the golden flute’ successor, James Galway. Beyond them, his influences include Cuban legend Richard Egües, and jazz greats Herbie Mann and Hubert Laws.”

Bailey Hall is located on the A. Hugh Adams Central Campus at 3501 SW Davie Rd. in Davie and offers free parking. Subscriptions and individual tickets are available by visiting southfloridajazz.org, www.baileyhall.org or contacting the Bailey Hall box office at (954) 201-6884. The box office and phone lines are open Monday through Friday from noon to 5 p.m.; Saturday from 7:00 p.m. until curtain time. All performances begin at 8:00 p.m. Music courtesy of KCC Productions (305) 332-2623

Funding for this organization is provided in part by the Board of County Commissioners of Broward County, Florida, as recommended by the Broward Cultural Council