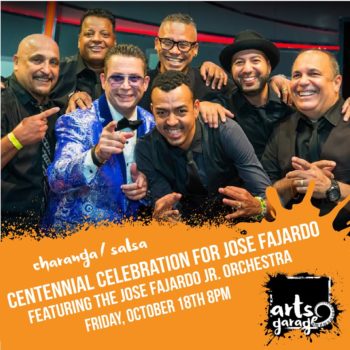 Friday October 18 at 8 PM: Get ready for a very special show at Arts Garage! Jose Fajardo, Jr.’s father, Jose Fajardo, would have been 100 on this day. This show will celebrate the Charanga Flute master who was well known during the Palladium days! Jose Fajardo, Jr. began at the age of 3 with his father playing percussion and since then has performed alongside and/or has recorded with some of the best and iconic Latin artists and musicians of all time, including Jose Fajardo, Sr, The Fania All-Stars, Johnny Pacheco, Larry Harlow, Orchestra Broadway, Azuquita, Alfredo De La Fe, Tipica 73, Oscar D’Leon, Jose Alberto (El Canario), La Sonora Matancera, Johnny Ray, Grupo Imagen, Luisito Carrion, Pedro Jesus, Cano Estremera, Edgar Joel, Johnny Almendra, Tito Puente, Sheila E., Nino Segarra, Cachao, and many others.

After the untimely death of his father in 2001, Jose Fajardo, Jr. has been the director of the orchestra created by his father in 1949 and has changed the traditional sound of charanga music to a larger salsa sound for all generations. In 2006 he was signed and is still endorsed by the leading manufacturer of percussion instruments, “Latin percussion,” a division of KMC Music. His single, “El Swing of New York” released in 2011, was No. 1 for “Salsa Magazine” play list for 4 consecutive weeks.

In 2014 he launched his new single, “Yo Estoy Desengañado” (Salsa Version) originally recorded as a ballad by the world-famous Cuban singer Orlando Contreras. This track was launched as one of the songs on his upcoming CD release “Mis Recuerdos”. In May of 2015 once again Fajardo released another single “No Tiene Rival” that has been a dancer’s delight. Recently he has been on a tour throughout cities in the United States to teach local students Latin American rhythms and culture.

During the month of October, donate an art supply to support students at Carver Middle School (https://artsgarage.org/heartfelt/) or make a $10 donation for the program and receive a FREE DRINK at our bar! Arts Garage is located at 94 NE 2nd Ave in Delray Beach. Tickets are $35-$40-$45 at artsgarage.org or 561-450-6357. BRING YOUR OWN … WHATEVER! The theater boasts cabaret-style table seating, where patrons can bring their own food and non-alcoholic drinks. Music courtesy of KCC Productions.