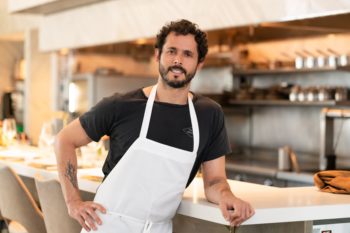 Continuing his successful Chef-in-Residence at Three, the vibrant, upscale eatery located within the Wynwood Arcade, Chef Ari Taymor of Little Prince LA will debut ‘Vegetables Aren’t Just a SideShow’, a unique, veggie-infused cooking class at In the Kitchen, the partner cooking school next to Three, on Wednesday, October 2nd from 6:30 – 8:30pm.

Focusing on his love for creating vegetable-focused dishes, Chef Ari Taymor will teach attendees how to prepare four different types of dishes with vegetables as the main component. In the two-hour class, the following menu will come to life:

Warm wild Mushroom salad with chicories, hazelnut, and vadouvan
Roasted Carrots with dandelion salsa verde
Roasted Lamb Saddle
Dessert: Buckwheat-Chocolate torte with plum sherbert and almond cream
After working in Michelin starred and James Beard-winning restaurants in San Francisco and Southern France, Chef Taymor opened his first restaurant, Alma, in Los Angeles in 2012. The restaurant was a local darling and in 2013 was named the Best New Restaurant in America by Bon Appétit. The following year, Chef Taymor was named one of Food & Wine’s Best New Chefs, and in 2015, he was nominated for Rising Star Chef by the James Beard Foundation. After shuttering Alma at the end of 2017, Chef Taymor and his partners now own and operate Little Prince along the coast of Los Angeles where they continue to explore their love of the diverse ingredients and culture that make Southern California unique.

The class fits 16 people and cost of attendance is $125. To purchase a ticket, please visit https://inthekitchenmiami.com/class/cooking-class-with-chef-ari-taymor/.