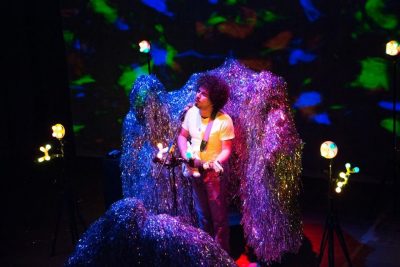 Masters of Sound, part of Masters of Tomorrow, is a concert experience at a state-of-the-art stage behind The LAB Miami that will immediately follow the Masters of Design conference.Â

Masters of Sound is free and open the public thanks to the support of Aunken Labs and Nativo, with music curated by III Points, Miamiâ€™s leading Music, Art, and Technology Festival.

Artists performing include critically acclaimed Helado Negro and DJ Jacques Renault. Additionally, at the concert, Goldman Global Arts andÂ #fordistasÂ will unveil the latest mural by ELLE, a female graffiti and street artist based in Brooklyn and LA, celebrating the role of women in science and technology.

7:30 Pm / True Vine, Miami, FL
True Vine is a Miami-based Christian DJ project inspired by the New Testament. He shares a divine vision of music that pulls from ancient Hebrew influences with an apocalyptic, biblical, and prophetic sound.

10:30 Pm / Jacques Renault, Brooklyn, NY
Jacques is a DJ and producer from the Washington, D.C. area who lives and works in Brooklyn. He runs Let’s Play House, a raving house, disco, and techno party as well as an imprint of the same persuasion, with friend and partner, Nik Mercer. He owns three plants, a rotary mixer, thousands of records, and a similar number of T-shirts. Despite working within the confines of a different genre, Dischord Records is still probably his favorite label.