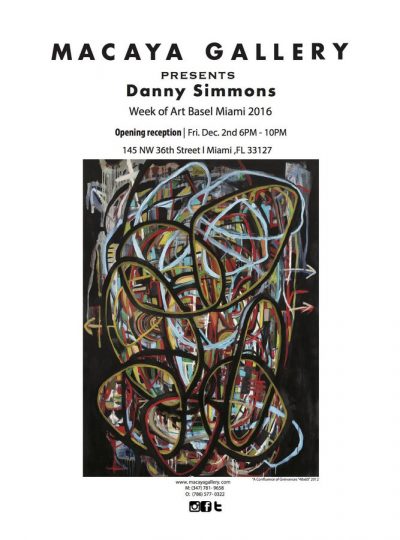 Danny Simmons, Jr., is an American abstract painter from Queens, NY, who once coined his particular style of painting as â€œneo- African Abstract Expressionism.â€ His talent and passion for the arts reaches beyond the canvas; He is a published author, poet, painter and art philanthropist. He has become a leader in the art world with his philanthropic ventures, artistic talents and creative mind and drive.

The New York Times, in reviewing one of his art exhibitions, stated that Simmons â€œinjects freshnessâ€ into his abstracts, and that they are â€œmeticulously rendered and decoratively impressive.â€ Today, his works appear in prominent locales around the globe, including: Brooklyn Academy of Music, Brooklyn Museum, Chase Manhattan Bank, Deutsche Bank, Schomburg Center for Black Culture, The Smithsonian, United Nations, and, on an international scope has shown work in France, Amsterdam and Ghana. In 2015, he served as a scholarly consultant for the Smithsonian National Museum of African American History and Culture (NMAAHC) in Washington, DC.

Simmons is co-founder, along with his siblings, music mogul Russell, and hip hop legend Joseph Simmons aka â€œRev Runâ€, and president of the Rush Arts Gallery. He is also founder and VP of the Rush Philanthropic Arts Foundation, a 501(c)3 organization â€œdedicated to providing disadvantaged urban youth with significant arts exposure and access to the arts.â€ He is a former board member of the Brooklyn Museum, the Brooklyn Public Library, the New York Foundation for the Arts, and the National Conference of Artists. His own works have been obtained by art lovers and renowned celebrities everywhere, including: music industry executive/producer Lyor Cohen, film director/producer Stan Lathan, musical producer Andre Harrell, actor Ron Perlman, renowned businessman Olivier Sarkozy, actress Annabella Sciorra, actor Will Smith, and many others.