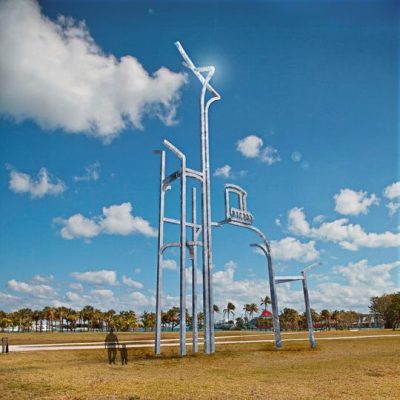 The Spanish artist Juan Garaizabal is ready for his installation of Havanaâ€™s Balcony (BalcÃ³n de la Habana) at the Museum Park in the city of Miami. The steel structure will be presented under the framework of Miamiâ€™s Art Week. The piece is the first part of an initiative that will be completed with the installation of a sister sculpture in the MalecÃ³n of Havana in 2017.

Havanaâ€™s Balcony (BalcÃ³n de La Habana) is a 69 feet high sculpture – approximately the height of a six-story building. It has an imposing structure of stainless steel, partially coated with LED lights, that will be visible from the bay and land throughout the city, changing what is now the skyline of Miami. It will be located in Museum Park, the neurological center of culture and art in Miami, along with the PÃ©rez Art Museum and The Patricia and Phillip Frost Museum of Science. The Havanaâ€™s Balcony (BalcÃ³n de la Habana) in Miami will have a replica installation of a sculpture in the Cuban capital, which recreates the Miamiâ€™s Art Deco lines in 2017. The two sister sculptures will be placed facing each other. Through this work, the artist tries to not only recreate the symbol of a culture, but also the essence that lingers in the minds of many Cubans based in Miami. The structure will be an icon of the city.

“I intend to work where history is being made. Miami and Havana, are both having transcendental changes,” explained the artist Juan Garaizabal. “The idea is to materialize the physical connection that already exists and is rooted in Miami. A structure so symbolic such as the balconies of Havana is the perfect representation of nostalgia that this Caribbean city evokes in the majority of the Miami population. ”

Miamiâ€™s most prominent personalities such as Jorge Perez, Ella Fontanals-Cisneros, through the CIFO foundation, The Bayfront Park Management Trust Miami, and Mana Contemporary, as well as the artistâ€™s foundation, Urban Memories, are involved in the support of the project.

About Juan Garaizabal
Juan Garaizabal is an internationally recognized conceptual artist and sculptor. His “Urban Memories (Memorias Urbanas),” are massive structures that alongside with their particular strategic location and lighting, strategically evoking architectural historical elements, signifying the memory of the cities. Despite being an artist of conceptual origins, as a sculptor his work is done by hand, using his own techniques such as: forging, carpentry, electricity, plasticity and masonry.