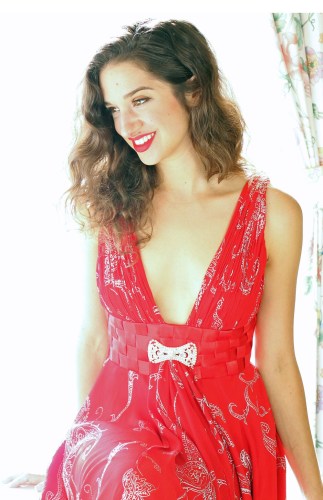 Living Room Bar, the modern, nighttime playground located at the W South Beach known for their visually stunning artisanal cocktails and sexy, sophisticated ambiance, will kick off South Beach Jazz Festival with a live performance by American singer-songwriter Chloe Dolandis.
A young voice with an old soul, dynamic entertainer Dolandis moves audiences with her powerful vocals and commanding stage presence. Her debut album, â€œBring Back The Feverâ€, penned by Dolandis and her writing team, offers a uniquely stylistic blend of jazz, pop, and soul
Chloe has performed alongside a broad spectrum of public figures and entertainers including jazz legends Ira Sullivan and Jesse Jones Jr., Grammy winners Billy Stritch and Zach Ziskin, Jeff Dunham, Pitbull, and Andy Roddick. No stranger to being behind a microphone, she has voiced numerous radio and TV spots for brands including Coca-Cola, UNICEF, the Miami Dolphins, Payless, and HBO Latin America. As a television personality she is best known for hosting Nickelodeonâ€™s SPLAT! and Friday Night SlimeTime.
The South Beach Jazz Festival runs December 7 â€“ 11. The proceeds will benefit Power Access, supporting the needs of people with disabilities. Each musical performance will showcase the artistry of at least one person with a disability.