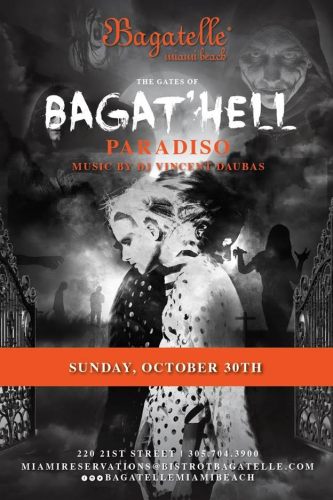 All gates of hell, purgatory, paradise and heaven will lead to the Gates of Bagat’hell Brunch Paradiso, on Sunday, October 30, 2016 from 12 PM-6 PM at Bagatelle Miami Beach. Inspired by Danteâ€™s Divine Comedy, brunch will be based on the 14th century trilogy composed of Inferno, Purgatorio and Paradiso.

Delectable dishes and Halloween-themed cocktails will be served by a staff of nuns and priests and the restaurant will transform in a spooky space decorated with coffins, flames and ghosts. A creepy set of beats will be played throughout the brunch by Vincent Daubas.