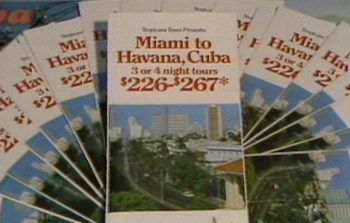 In 1979 Diana Gonzalez, a young Cuban-American TV reporter, traveled to Cuba with her reporterâ€™s notebook, a cameraman and a sheaf of travel documents and reported on life in Cuba â€“ for visitors and for Cubans. In her reports, aired on Miamiâ€™s WTVJ-4, Gonzalez found out what it was like to stay at the Hotel Nacional, shop in a Communist capitol, dine in Havanaâ€™s finest restaurant while Cubans endured food shortages, and captured Cuban youth culture, from record stores and teen hangouts to the Cuban version of â€œAmerican Bandstand.â€

In â€œTicket To Havana: Reporting In Cuba in the 1970s,â€ Emmy Award-winning television reporter Diana Gonzalez will recount her 1979 reporting trip to Cuba, screening some of the stories she covered there and talking about reporting in authoritarian Cuba during a thaw in U.S. â€“ Cuba relations just six months before the Mariel Boatlift dramatically changed the relationship between the United States and Cuba.