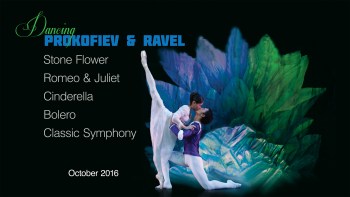 After an incredible season on June, 2016 and the participation at The International Young Dancers Festival in Indonesia, Arts Ballet Theatre of Florida prepares its new 2017 season with amazing programs showcasing the very best of international ballet.

In celebration of the 125th anniversary of the master composer Sergei Prokofiev, the Art Ballet Theatre of Florida, presents excerpts from the acclaimed classical ballet pieces, Stone Flower, Cinderella, Romeo & Juliet, plus the world premiere of a piece inspired by Prokofievâ€™s first symphony, choreographed by Vladimir Issaev, Artistic Director of the company.

Cinderella, is Prokofievâ€™s most descriptive, melodious and beautiful composition. This ballet piece was first premiered by the Bolshoi Ballet in 1945 with choreography by Rostislav Zkharov. But this time south Floridians will have the privilege to experience of our talented Vladimir Issaev who promises create a short suite, alongside other great classical ballet pieces of the great Russian composer.

Stone Flower is Sergei Prokofiev’s eighth and last ballet, written between 1948 and 1953. It is based on the Russian Ural folk tale of the same name The Story of the Stone Flower by Pavel Bazhov and is also the last of the trilogy of ballets Prokofiev wrote in the Russian ballet tradition, a mixture of real-life scenes and fantastic dreams, of classical dance and folk choreography.

Arts Ballet Theatreâ€™s production of the Stone Flower will feature choreography by Maestro Issaev. The story concerns the fate of the stone carver, Danila, who wishes to see the full power of the stone and show its beauty to the people. This classical piece shows a love story that showcases how this powerful feeling exceeds the adversities.

Issaevâ€™s Stone Flower was commissioned by the Michiko Matsumoto Ballet in Japan, and its performance in 2011 received excellent reviews.

Also this program presents the ultimately love story of all times Romeo and Juliet, this piece composed by Prokofiev is based on the universal and remarkable play by Shakespeare. It is a romantic and dramatic tale of love between two youngsters coming from feuding families forced to hide their love and tragically ending.

Suites of the ballet music were heard in Moscow and the United States, but the full ballet premiered in the Mahen Theatre, Brno (then in Czechoslovakia, now in the Czech Republic), on December 30th 1938. The famous adagio of the balcony scene, with choreography of Lavrovsky will be an important scene presented by The Arts Ballet Theatre of Florida. Mary Carmen Catoya and Daniel Sarabia principal dancers will be responsible for leading the main roles.

The program will also feature the collaboration of the distinguished guest choreographer Miao Zong with a beautiful ballet number named Bolero from the French composer Maurice Ravel. Originally composed as a ballet commissioned by Russian actress and dancer Ida Rubinstein, the piece, which premiered in 1928, is Ravel’s most famous musical composition.

Chinese native Miao Zong, have danced with Le Jeune Ballet de France, Ballet Nacional de Caracas, Boston Ballet and Ballet de lâ€˜Opera du Rhin in France where he is currently assistant director. In 2004 he made his choreographic debut with Le Chant de Dieu, a solo that he danced at Boston Ballet and then was invited by Mr. Peter Martins to create a new piece â€œEntre nousâ€ for the School of American Ballet in New York. And now The Arts Ballet Theater of Florida is privileged to have him as a collaborator.