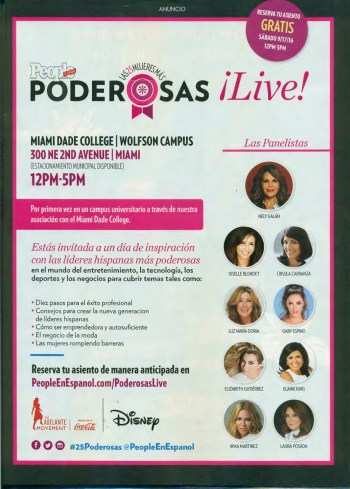 Adelante and Coca-Cola unite with People en EspaÃ±olâ€™s â€œ25 Most Influential Womenâ€ platform, which honors the accomplishments of Latinas in the U.S., to host a day of empowerment and business skills training. The event is free of charge. Nely Galan will lead a session in the afternoon for local high school students, college students and women from the community.

Dubbed the “Tropical Tycoon” by The New York Times Magazine, Nely GalaÌn is a women’s empowerment and entrepreneurship advocate, an Emmy Award-winning television producer, and a serial entrepreneur. Her Company, GalaÌn Entertainment, is a dynamic, multicultural media company, that has created more than seven hundred television shows in English and Spanish and helped launch ten channels around the world. The first Latina president of entertainment of a U.S. television network, Telemundo, GalaÌn is also the founder of The Adelante Movement, a digital platform and national tour that inspires and trains Latinas in entrepreneurship, presented by Coca-Cola. She is the author of The New York Times Bestseller SELF-MADE: Becoming Empowered, Self-Reliant and Rich in Every Way, (Random House), published in June 2016, about the revolution in women entrepreneurship led by multi-cultural women worldwide. The Spanish version: Â¡ADELANTE! CÃ³mo ser EMPRENDEDORA y AUTOSUFICIENTE para alcanzar una vida RICA y REALIZADA, on sale August 30, 2016.