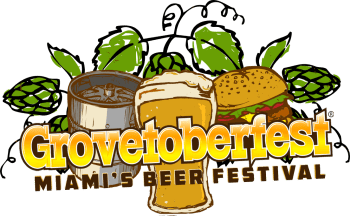 Craft beer lovers know that Grovetoberfest is a fun way to do some serious beer tasting of over 300 craft beers from around the world. This year, Grovetoberfest will move slightly South to Miami Marine Stadium; a move geared towards allowing more people to experience Floridaâ€™s largest beer festival. In addition, it has upped the ante by bringing a beer connoisseur on board who has been hand-selecting some of the rarest beers available for this yearâ€™s festival.

â€œWeâ€™re overflowing with good news. In our new home, Grovetoberfest will continue to offer local favorites and mainstream craft beers, but with a renewed focus on elite craft beers. We are working directly with the brewers to secure and reserve batches of incredibly esoteric and unique brews,â€ says Tony Albelo, organizer and chief sample taster for Grovetoberfest. This year, Blackberry Farms Brewery will be pouring in the VIP area. Civil Society Brewing will also be pouring at the event, making this the first time theyâ€™ve ever poured at a Miami-Dade beer fest. In addition, for the first time ever, Grovetoberfest will be pouring Prairie, Crooked Stave, To Ã˜l, Mikkeller, and Slim Pickins. Aficionados will delight in sampling beers in the Sunshine State-of-Mind, a collection of over 40 Florida breweries including Wynwood Brewing Company, J. Wakefield Brewing, MIA Brewing, Funky Buddha, Saltwater, Banging Banjos, Due South and Biscayne Brewing, to name a few.

The new location allows for more room and easier parking. Other aspects of the festival include the VIP Lounge, which will be hosted by Chef M from Latin House Grill. In addition, it will offer certain perks not available to the general ticket holder such as specialty brews, covered seating area and air-conditioned bathrooms. The Homebrew Pavilion will showcase special brews made by passionate beer drinkers; the Food Row will offer food for purchase and the Kitchen Lab will feature beer/food pairing demonstrations by local chefs such as Ryan Martin from 180Â° at the DRB, and Zeke Man from 305 Brews. As usual, a Live Music Stage will feature dance-inducing music throughout the entire day.